You will find out that you’ve been living in Germany too long, when you’ve stopped smiling. So keep smiling!

I’m Catherine Kaiser originally from India. I met my German husband in India about 37 years ago. For the first few years we’ve been travelling back and forth between Germany and India. We then decided to settle down in Niedersachsen- Germany when the children were of school age. It took me a while to gain footing and understand the German culture, learn the language, while at the same time raise my children. Together we have raised 10 children, now all adults and we also have 7 grandchildren. I work as a Photographist and I’ve also published two books: “Sari & Sauerkraut – an Indian woman balancing between two cultures”, and the other is also a biographical health book “My Amazing All Round Health Elixir- Tenfold mother regains her health through natural mineral balance.”

What were the biggest struggles when you moved in here?

When I moved to Germany back in the late 70’s, there weren’t many foreigners. For me, it was the beginning of a “new birth”, in a new culture, in a new climate with a new lifestyle, and with people who even looked different. These Germans were tall and stout, almost over-powering, giving me a sense of being inferior, being slim and short. Having a darker skin complexion, I was often confronted with questioning eyes. People didn’t smile as much. What stood out to me the most was that there were very few children.

Somehow, the warm sensations that had filled the air in India: the excitement of everyday living, the sun shining on my face, the laughter of the children, just seemed to have faded away. The beautiful colours of the east had vanished into oblivion; the most commonly used colours were black, gray, white, blue and a shade of red. In India as the sun rises, the hustle and bustle of everyday life takes over, with loud verbal communications on the streets of active trade in the daily necessities, and consumer goods. It’s something that is not imaginable in the western world. An open- air- market! In India people just walk across the street when and wherever they deem fit: bullock carts, camels, donkeys, cows and dogs; I mean, whatever you can think of might be seen in the middle of the street. In Germany the streets were comparatively empty. No one dared to cross the street except when (and where) traffic lights signalled them to. Public transportation is better and more organised here in Germany, but seems to be “stricken” with silence. Life had seemed so simple before, but now it looked as if the complexity and the coldness had taken over. I surely wasn’t in any science fiction film, but I felt as if I were an alien and had come from another planet! This was my reality and there was no turning back. Faced with feelings of uncertainty, I needed lot more courage and faith that God would somehow carry me through this stage of life. I see things differently, not as an expat but as a human being. It doesn’t matter to me anymore in which part of the world I live. I have friends from all parts of the world and I’m happy when I can enrich the lives of those around me. 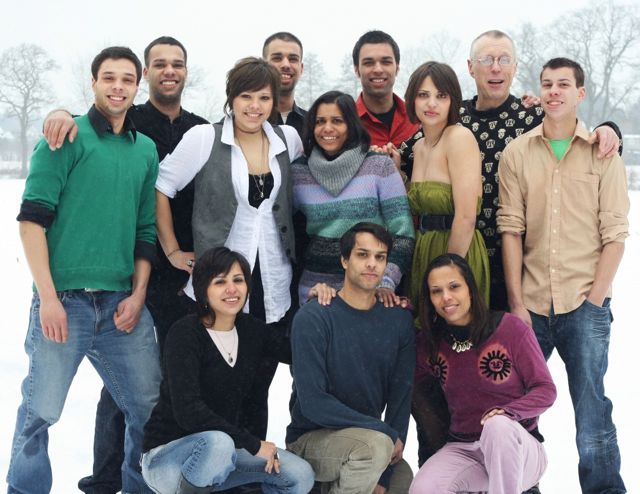 An advice you would give to someone thinking of moving to Germany?

Learn the language as that is the most important part of integrating with the German people and culture. They have the “der, die und das” – three genders – one for every noun – and four different ways to conjugate each, depending on the context… That’s enough to drive anyone crazy. But don’t worry, you will be understood!

You’ve got to embrace new changes, traditions, and learn to interact with others and see where you have similar values like being punctual and having good manners etc. This will make integrating into the German society much easier for you.

The weather here is unpredictable! It will certainly take a while for you to get used to it. For me it is mostly cold. Brrrrrh!!! There are very few days of really “hot” weather. Sunshine is not to be taken for granted, so get out in the sun at every opportunity. If the weather isn’t as you expected it to be – try smiling!

German food is certainly in need of spices! Yet once you get accustomed to it, you might find something good. Germans love to have a good steak and the majority of the people are meat lovers. Wurst and Sauerkraut are the German “fast-food”. Germans also love coffee and cake!!! Oh! I don’t want to forget the “Beer”, German beer is one of the best in the world.

You’ve got to have patience with the German bureaucracy. Everything here takes time! The paper work here will drive you nuts. Also very importantly, hang on to every piece of legal paper or you’ll end up like the story of the King who lost his Kingdom for the loss of a horseshoe.

What is it that you like/dislike about the German society and the German people?

Germans have a deep appreciation for nature. It’s a beautiful country with lots of greenery, lakes, rivers, mountains and wonderful islands in the north with beautiful beaches. Germans love riding the bike and we have an intricate well planned bicycle path throughout the city. Germans are very generous when it comes to giving to a good cause. I’ve also heard of German doctors or social workers who willingly go to poorer countries to help others in need.

Germans are very reserved. Nevertheless, making them your friend helps them to open-up and confide in you. If you’re friendly, others will be friendly too! At times I still find it difficult when it comes to their very formal manner of greeting; Herr…. (using their surname). I also keep mixing up the “du’s” and “Sie’s” or “dir’s” and “Ihnen’s”… Nevertheless, I have some wonderful German friends and working colleagues.

Family life is very important to a German. Most German families consist of 1 -2 children. Germany has more retirees than young people as birth rates keep shrinking. Marriages are becoming more unstable, and there is a significant rise of single parent families, just as everywhere else in the world. Dogs and cats are the Germans best friends, so be mindful of them.

Germany in general is a clean and safe country.

When we had about 3-4 children, I was really looked down upon as an “Ausländer/foreigner” and on top of it having so many children: “Like the rabbits!” – that’s the comment I would receive. As the years past by we had 10 children, we were then referred to as “A social”. Now that all my children have grown up people treat me with much more respect and are really astonished upon interacting with me and even compliment me with “Alle Achtung” when they find out that I have raised 10 children. What changed here? I don’t know! I’ll still have to find that out. Nevertheless it’s a good compliment!

Yet another, very interesting misconception, that most Germans have about mothers who’ve had multiple pregnancies is, that the poor mother must be blown out of proportion. Upon meeting me, they are flabbergasted! Taking a good look, checking me out from head to toe, their curiosity knows no bounds. They come up with the most unusual questions like: “Are you sure? I mean, are you sure they are all yours?”, “You had a set of twins, didn’t you?” ,“How many of them did you adopt?”, “I mean you look so young yourself! You could be one of them.” ,“Are you sure that you’re the mother of all ten or are you trying to pull a fast one on us?”, “What did you do with your tummy, because you don’t seem to have one?”, “Are they all from the same man?” , “It is just downright unbelievable!”   They wonder if I am even telling them the truth. They keep shaking their heads and, with a smile, walk on in shocked amazement…

It didn’t matter where we went; we were quite an astonishing sight. People would ask us if we were running a “kindergarten” or some “kinderverein/ children’s club” etc.

What does integration mean to you?

For me integration means, having like-minded people around me; people that share the same values, willing to share new ideas and are open to changes. There are lots of people that have lived for a long time in Germany but are not integrated into the German society, as they hang on to their own identities, cultures, and do not interact with the Germans. They also prefer to live in their own clan. Of course, integration for me means that both the Germans and the foreigners meeting each other half way. It not just a one-sided thing! I think that Germans have to realize that we foreigners are also contributing to their country in some way or other, which is very much overlooked. Variety is the spice of life! I also feel that the young people whether German or foreigner, are the most neglected and need some kind of perspective in life, some vision and goals.

As for my children, some of them have studied while others have done some sort of apprenticeship. They are bilingual, speaking both English and German and are well integrated into the German society.

Is Germany a multicultural society?

I do think that Germany is a multicultural society or at least getting there. There are a lot more foreigners now than when I first arrived, which makes you feel more at ease. Where ever you go now there are many multi cultural shops, cafes, restaurants etc. The German ways of dressing up has changed as they have brought in more color and style. The Germans have also started to take a liking to the Indian food with its wonderful spices. There is a real “Bollywood” craze going on and the Germans very enthusiastically learn the songs and dances from the Bollywood movies.

The problem we have in Germany is that we have so many different terms like “Asylum seeker”, ”immigrant”, “tourist”, “refugees”, “foreigner” etc which I feel is very disturbing and in general produces mixed reactions, most of it in a negative way. Now with many more refugees coming into the country, I do hope that the human mindset changes if we are going to be living in peace and safety.

What does the future hold?

The global economic uncertainties and the never-ending job losses know no boundaries. So if you plan on coming to Germany soberly consider the reality before venturing into the unknown. Whether German or foreigner, what we need is faith to place our future in the hands of the One who holds it with divine serenity.

Remember that you are someone special; you are more than what you think you are. I do not know what the future holds, but I do know that I have this second to do all the kindness that I can do. Tomorrow is way beyond the horizon; I may or may not live to see it, so why worry about it. Live life to the full and share the love you have with those around you regardless of who they are. Whether rich or poor, bond or free, highly educated or illiterate, love is what every soul yearns for and what each one of us has to give!