Tommy is a child of combined cultures,… he has both an Israeli and Dutch passport… but even though he was born in Berlin he can’t be a German citizen (without giving up the Israeli one). It’s the same for me, I feel I have more than one “home”, and I guess he will have that, too.

It’s not everyday you’re on TV, let alone get alluded to as a traitor by a host of public figures, including the Minister of the Treasury, all for being an expat. But both of these things happened to my friend and colleague Moran Yaheli when she was recently profiled in a TV report about Israelis living abroad. “We were on 4 episodes, there were 5 in total, and I’ve been on the morning talk show and the radio,” Moran recounts… “and I was told that a satire show used our part from the morning show. This Sunday I’m going to be on another morning show panel. I’m a Z-list celebrity!”

But we’ll get back to that.

Moran moved to Berlin from Tel Aviv in 2011 after meeting her now fiancé, Bastiaan (Bas). Their story alone is a lesson in 21st century romances: they met on the online Couchsurfing platform, and Moran spent a few nights on Bas’ couch in Amsterdam while traveling around Europe. After surviving a few months of long-distance Skype calls and the occasional visit, the two decided to make a home for themselves in Europe. They both found jobs in Berlin and now live together in the Schöneberg district. Last year they welcomed their first baby, a beautiful boy named Tommy. 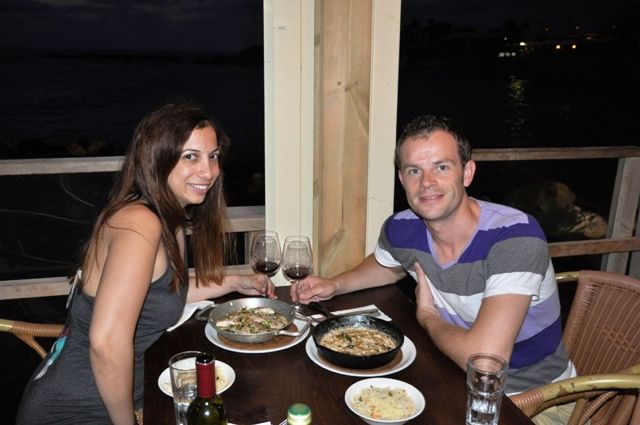 Tommy is primed to grow up as what has been coined the Third Culture Kid (TCK): “a person who has spent a significant part of his or her developmental years outside their parents’ culture” (David Pollock). With an Israeli mother, Dutch father, childhood (or at least babyhood) in Germany, and frequent trips to both mother – and fatherlands, Tommy will grow up navigating at least three cultural codes, languages, and geographies. It may seem like an unusual life, but it’s more and more a norm in our increasingly globalized and interconnected world. Even Buzzfeed published an article

on “signs you’re a TCK” that included swearing in multiple languages, time zone expertise, and a transient understanding of “home”.

“Tommy is a child of combined cultures,” Moran reflects… “he has both an Israeli and Dutch passport… but even though he was born in Berlin he can’t be a German citizen (without giving up the Israeli one – ed.). It’s the same for me, I feel I have more than one “home”, and I guess he will have that, too.

With only 8 months behind him so far in this world, Tommy has already taken two lengthy trips to Tel Aviv and one to the Netherlands. He is a dual citizen and hears an average 2-4 languages per day: Hebrew from his mom, Dutch from his dad, German from his environment, and English, the language in which his parents communicate.

“We want to do the OPOL method, ‘One Parent One Language’, have you heard of it?” Moran asks me. “That way he gets just Hebrew from me, just Dutch from Bas. Tommy’s baby noises are kind of both Hebrew and Dutch, he does a lot of the “Chhh” noise”… she giggles. “When the neighbor babysits he only speaks German with him. I want him to go to a bilingual Hebrew-German Kita (child care center – ed.).”

Tommy is not just (im)migrant, not just citizen, but somewhere in between. He was born and lives in Berlin but isn’t a German citizen. If he moves to either Israel or the Netherlands, he will be moving there as a citizen but won’t necessarily have grown up there. His diverse lineage, cross-cultural upbringing, and even his darker features may mean he carries the mark of Migrationshintergrund most of his life, whether in Germany, Israel, the Netherlands, or somewhere else. Tommy will “build relationships to all these cultures but perhaps never have full ownership of any”. TCKs often feel a stronger sense of belonging and connection to others who have a similar background rather than a particular one. When Tommy grows up, he may fall in love and marry another TCK, someone who grew up in Rome with Singaporean and British parents, or perhaps someone from Sydney with French and Brazilian parents. Studies say his chances of doing so are 1 in 4. His future inclination to raise his children as TCKs? Even higher. His sense of home will be an abstract one, one that he feels more in relation to people, memories, and experiences than citizenship, borders, and geography.

“I can’t vote in Israel because Israeli doesn’t allow absentee ballots… even my cousin (in Israel) doesn’t think I should be able to vote in their elections because I don’t live there,” Moran rolls her eyes. “But even though I don’t live in Israel, I still feel it’s my home… my friends and family are there. As for Tommy, he will have 3 homes for now and as he grows maybe just two – Israel which he will visit a lot, and Holland where he will likely live at some point. If we’re in Holland or Germany, I’m going to be seen as a foreigner. I don’t want Tommy to be made fun of or be ashamed of me. So it’s important for me that Tommy meets and grows up in an international environment, with kids who also have diverse backgrounds. With other kids like him.”

Confusions and complications aside, studies on Third Culture Kids show that they reap a whole host of benefits from their intercultural upbringings and lifestyles: TCKs live in four countries during their lives on average, 85% speak two or more languages (47% speak three or more), and 90% earn a Bachelor’s Degree with 40% going on to further study. Statistically they’re a well-educated, well-rounded, and well-suited group for the demands of the 21st century, both professionally and personally. They just may have difficulty articulating to you where home is.

“I don’t know where Tommy will end up,” considers Moran.

Right now the current situation in Israel is complicated and I can’t see us going back. Economically, politically, demographically, religiously, etc. But I am not giving up hope… Israel is a beautiful place, the best place, it’s just unfortunately in crisis. If things get better I would be on the first plane home. And, if the situation improves, I would love for Tommy to choose Israel, too.

As to the economic situation… 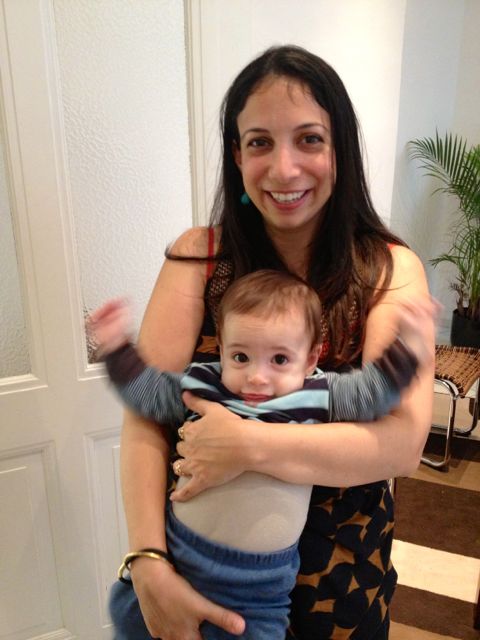 “The rising number of Orthodox Jews is scary and it is so expensive to live in Tel Aviv. I paid the same rent for a shoebox in Tel Aviv as I do now with Bas in our big, new flat in Berlin. Groceries are over twice as expensive in Israel than Germany!”

126% more expensive in fact, which brings us back to the TV report. Grocery and rent costs were one topic Moran and a series of other Israeli expats were asked about when interviewed about living abroad. The economic situation in Israel is pretty dire and gave rise to the ongoing social justice protests that began in 2011, the largest in the country’s history with over 1 million people gathering in Tel Aviv’s Rabin Square. While mostly focused on the cost of living differences, Moran also got token questions about what it feels like to be a Jew in Germany. On the show, the journalist shuttles her over to the Holocaust Memorial to the Jews in Mitte. He’s curious how she feels when she sees it.

“The Jewish Memorial doesn’t speak to me,” Moran explained first to the journalist and later to me. “It’s more the everyday. Like seeing trains covered in snow… we don’t have snow covered trains in Israel and it reminds me of images we saw in school of the deportation of the Jews. Or hearing the voice on the train say ‘Ausstieg’ which always makes me think of ‘Auschwitz’. Seeing old people on the street and wondering what role they played in World War II.”

And the Minister of the Treasury? When asked to respond to the TV report, he was in Budapest, giving a speech on antisemitism.

“A word to all those who have “had it” and left for Europe”… Moran translates his response for me… “I’m here to deliver a speech in the Budapest Parliament about antisemitism, to remind them of how they tried to kill my father here only because Jewish people didn’t have their own land, how they did kill my grandfather in a camp, how they starved my uncles, how my grandmother was rescued at the last second from a “death march”. So excuse me if I’m a bit impatient with people who are willing to throw away the only homeland the Jewish people have ever had, just because Berlin is “more convenient”.”

Other politicians and one of the country’s most famous lawyers went so far as to call the Israeli expats in Berlin “traitors” and “slime that crawls in the sewer of Jewish society”, respectively. On the whole, however, Moran reports positive responses and understanding from those back in Israel, something she claims is a shift from the Zionist past.

“It’s the older generation that has a problem with people leaving Israel… the ones who escaped antisemitism, built the country and died in wars to protect it,” Moran explains.

They see our leaving as abandoning the ship, the cause, the ideal… for money. My parents were born in Israel but my grandparents were from Europe, so I have two passports, too, Israeli and Romanian. I want Tommy to grow up with both tradition and choice… for his religion and for where he makes his home.

And choices he will have…

For those with Hebrew skills or simply interested in watching and pretending to understand (like me), you can check out the video that includes Moran, Bas, and Tommy here. Also, I recommend this great little video about TCKs made by a Georgetown University student here. There’s also a Facebook group dedicated to TCKs around the world, check it out here!

For the German perspective on the German-Israeli friendship and the question of expats, click here (for German speakers).

Building fences is not a solution

My name is Julia and, though I’m German, my husband keeps telling me that I’m

One thought on “TV, The Treasury Minister, and third culture kids”