The Germans are in reality easy to please; they are overwhelmed and proud if you try to speak German, even if it’s a broken one.

She first stepped on the soil of Germany in the fall of 2008. She came to Hessen to do training at the Emerson Process Management and immediately fell in love with the country: “I have always dreamed of living a European life, thinking of ways how to live and work here.” A year later, Cyril Anne Wussow, during her second trip to Germany, met her future German husband and as she puts it: “All the pieces just fell into the right place.”

A chemist, a writer or both?

Cyril Anne Wussow was born and raised in the Philippines. She spent over 15 years in the capital city Manila and about 13 years in the province of Batangas. She earned a Bachelor’s degree in Chemistry at the University of Santo Tomas, Manila and she is a licensed chemist back in the Philippines. Today she is juggling four jobs: housewife, a freelance translator, blogger and a student at the Goethe University in Frankfurt am Main. “I do miss working in the laboratories or manufacturing companies sometimes, but in time, I can get back there. For now, I will enjoy this less-stressful way of life,” she says.

As a kid, Cyril Anne fancied writing a lot. She wrote poems during her free time and short plays for school and also did some small theater acts back on the other continent. “As soon as I got hooked to the power of Internet, I started blogging,” laughingly says the blogger and continues: “My blogs, yes I have two, are divided into serious stuff and a personal one. It is because I just felt the urge to help out other Filipinos who are struggling on learning the way of life in Germany, on all the paper work during visa application and stress from learning the German language.” She started the Pinay in Germany blog for her fellow Filipinos. “It is to show them that I was once wearing their shoes and I survived and I know they can do it too,” advises the young blogger. Her second blog is a personal page where she shares various thoughts about her life. 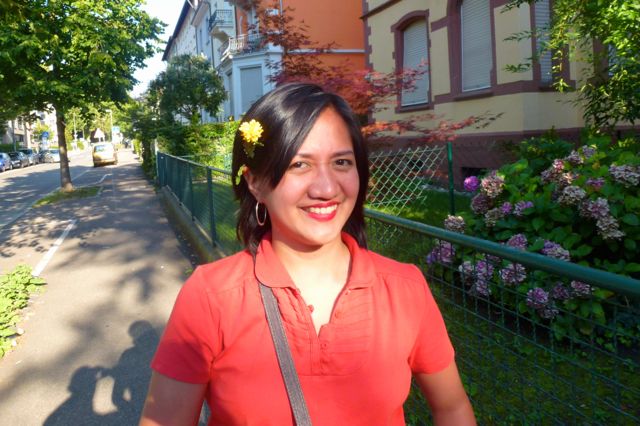 Cyril got married in the Philippines in May 2011 and migrated to Germany in October later that year to live with her husband. The integration process was not easy. “Although I equipped myself with enough basic German words before moving, it was still a struggle for me to communicate,” confirms the young Filipino and adds: “Living in a small town in Hessen, you cannot expect a lot of people to speak to you in Hochdeutsch (ed.- standard German), more so in English. During my walks in the nearby forest, most of my company would be retired couples; hence they speak Hessisch (ed. – dialect in Hessen).” Cyril is now thankful for their patience in order to keep a conversation with her during the walks.

The environment was also a big challenge for her, not just the weather, which is most of the times cold compared to the tropical islands of the Philippines, but also the German way of living and the community. “It is so silent and peaceful here,” laughs Cyril, but confirms that eventually she got used to the silence and now prefers it to the noisy environment of Manila.

Cyril admits that she enjoys the greenery of Germany and the countless parks and forests all over the country. “The first time I came here, I was in awe with its cleanliness and the vast forests and fresh air. It is also amazing for me how the streets and sidewalks are kept clean even in autumn,” Cyril recalls.

The young blogger also describes how her eating habits have changed since she moved to Hessen. Filipino food is often characterized by its combination of sweet, sour and salty flavours and is usually very high in fat. Cyril’s palate became too sensitive to all tastes or she simply got used to bland foods they prefer to cook at home. “I learned to minimise the use of sugar and salt when cooking. When we went for a vacation to the Philippines last year, I told my mom that she had put too much salt in the food, and she was surprised because she said that it was the same recipe I loved the most before I had migrated to Germany,” describes the Filipino and adds:

I couldn’t even drink one glass of halo-halo (ed. – a typical dessert made with sweetened jackfruit, beans, milk, sugar and crushed ice) because it was too sweet even without any added sugar. Something that, thankfully, my mother did not take negatively, she even asked me for some tips on how the foods were prepared in Europe and she adapted some of her recipes.”

“When a Filipino is asked about Germany, they immediately think of Oktoberfest. A local brewery back home years ago had even started its own version of Oktoberfest in Manila and it also became a tradition since then,” remembers the Filipino blogger. Filipinos also think that Germans eat only bread, sausages, potatoes and Sauerkraut. “I was quite surprised that there are a lot of Asian restaurants here and they are a hit, too, for the Germans,” surprisingly says the blogger.

Filipinos also often think that Germans are serious and strict people. “They still have this “portrait” from the World War II in mind. My family and friends were all amazed upon meeting my husband because he’s a “cowboy” and always keeps jokes in his pocket. They would always whisper to me that he changed their attitude about Germans,” Cyril smiles.

Cyril recalls one of the most embarrassing moments she had in Germany. In 2009 during her training days in Hessen, Cyril and her colleague went to a German supermarket to get their groceries. At a German supermarket the customer has to pack his items personally, and plastic bags are available at a certain price. It is but a different thing in the Philippines. “We have overflowing number of employees working at supermarkets and there are designated people to pack your items in a plastic or paper bag provided for free by the supermarket,” describes Cyril and starts to chuckle.

Being used to the Philippines system, Cyril and her colleague went to the supermarket only with a wallet. “We could only speak one German word at a time, and while at the counter, we did not understand the cashier telling us to get a bag for our groceries. We were only smiling and looking at her,” recalls the Filipino and continues: “She gave up eventually and started scanning our items. That was the time when we realized that something was wrong. I went back inside the supermarket searching for a bag to pack our groceries, I went from one customer to another asking “Sprechen Sie Englisch?” and all I got from them was “Nein.” A kind old lady understood my sign language about the grocery bag, she bent down and took two bags for me.”

Cyril remembers it as a very embarrassing and a funny moment at the same time and adds laughingly:

The line started to get longer and longer and all our items were still scattered at the end of the counter, since we were expecting somebody, at least the cashier, to pack the items for us.” 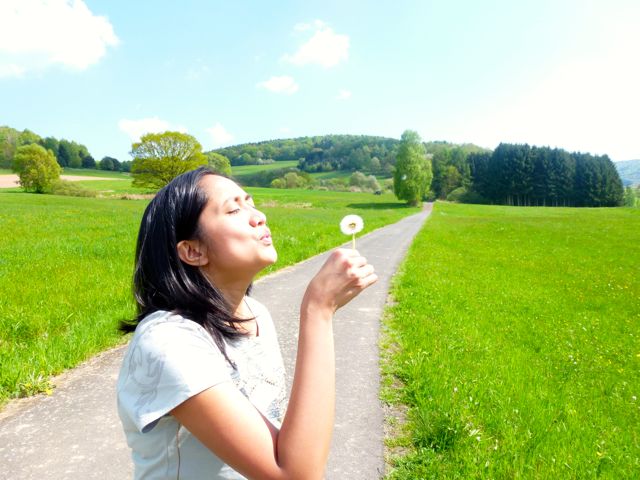 “In the VHS, where I learned my German, we were a really diverse group of people. Each one of us differs on the reasons why we are here. Some are from South America and are here to study, some Europeans are here for work and other are here because their families had already established a life after being guest workers in the past,” describes the blogger and adds: “I am also often mistaken for a Thai or an Indian, one sign that we have diverse groups of nationalities in Germany.”

Cyril finds Germany a multicultural country, but underlines that multiculturalism is a two-way process. “While we foreigners in Germany want that the Germans accept our presence in their land, we should also take necessary steps towards integration. It is not bad bringing with us our cultures, but we should know our boundaries and be open on learning and adapting the German culture,” concludes the young Filipino. She also thinks that respect is the key to living in harmony with the Germans. “The Germans are in reality easy to please; they are overwhelmed and proud if you try to speak German, even if it’s a broken one.”

3 thoughts on “The grocery bag”