Taking the long road of integration

Learning German is already one heck of a trouble, but that is just one tiny step in these millions of miles ahead that you have to take to integrate in Germany.

Taking the long road of integration

Four years ago Abu-Bakarr Jalloh had things going really well for him in Sierra Leone. The aspiring filmmaker and journalist had a career settled, he was working as a correspondent for the Associated Press (AP) and enjoyed a comfortable life around people who knew him well and whom he knew well. Despite that and against all expectations, he decided to leave. More precisely, to resettle in Germany.

“I wanted to have an education outside of my home country and to live abroad. Then I ended up in Germany, had to learn German and then… There was just this shock,” Abu-Bakarr admits.

He still manages to express this shock in one single facial expression. It says more than a thousand words. When he tries to explain his experience in words, they fall short. “I come from an extremely different culture, where people are warm. In Germany people are reserved. Apart from that, we have this culture where you can talk to anyone anytime. I know people from everywhere in Sierra Leone. This (Germany – ed.) is basically the wrong place for me,” he explains.

Abu-Bakarr had travelled to North America before moving to Germany. Along the way, he also found some British friends. Happy to know some great Europeans, he wasn’t particularly worried about moving to Germany. “I sort of thought that white people are all the same. I had this image of white people, mostly English speaking Canadians, Americans, British. They have their own completely different lifestyles, but then Germany…” the journalist recalls. “Learning German is already one heck of a trouble, but that is just one tiny step in these millions of miles ahead that you have to take to integrate in Germany. It was very hard.” 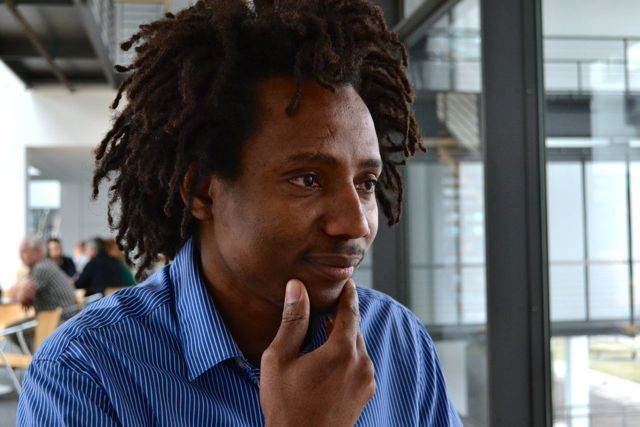 “Honestly, I say, when Africans, Sierra Leoneans leave Africa for the very first time, the motivation is that high,” he says and points with his hand well above his head, as high as his arms reach. “It is so high, but then you get to hit that shock in Germany. Then the motivation is – puff – on the ground. It hits you so hard that you are flat on the ground! And then you have to struggle.”

He continues to describe how the shock doesn’t finish just there: you start sinking, are getting depressed and becoming sad. These were all new emotions for Abu-Bakarr. “I have been able to get out of this soil, to raise on top of the surface a bit, but then the motivation in me, my zealousness, this enthusiasm in me – it is not there anymore. Instead, it is only two-three feet above the ground,” Abu-Bakarr confesses.

He says that a foreigner from Africa can never be fully integrated over here. The best you can do is to fit in to a certain extent, but it doesn’t spare you from the numerous surprises awaiting. “Sometimes things just come out of nowhere and you get this shock. For example, I used a paper napkin from a buffet to blow my nose during a break from a seminar and then this lady came from my back and started screaming: “Sie dürfen das nicht machen. Das ist nicht für Ihre Nase. Die sind ziemlich teuer”,” he describes. “I was so shocked about the way she yelled at me over a tissue that costs only few cents?!? After ten minutes she came back apologizing, but then she had already killed my day.”

What disturbs Abu-Bakarr the most is that people have a certain image of him before they even get to know him. He often feels that, as an African, his opinion is not taken seriously, and that he is not heard. “I have travelled the world, I have a lot of experience in North-America, Europe and different parts of Africa. I am probably more experienced than many Germans,” he says. “But when we start to talk about life in different parts of the world and I start giving examples of Switzerland or Norway or Denmark, and then I compare that to life in Canada or the USA, then the next question is: “where are you from?” As soon as I say Sierra Leone it means everything I have said so far doesn’t mean a thing.”

He does not think of it as racism, rather a discrimination. “You don’t have that sort of racism anymore where people say: “Oh you are black, I don’t want anything to do with you.” Though, you do have it sometimes when people are drunk. Then they have a tendency of getting it out of them talking to you in a really racist way,” Abu-Bakarr admits. 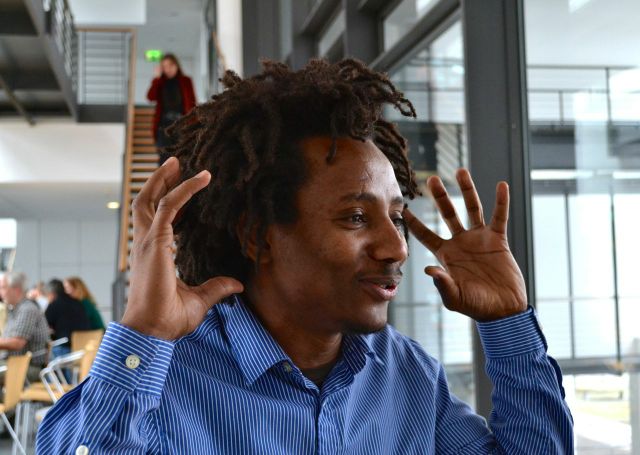 The people are much more often fascinated about his hair – everybody seems to want to touch it. “Although it is an easy way to break the ice, and it is not racism, it is hard to cope with. You feel like you are stupid. Why don’t you want to talk to me? I have brains too,” he brings an example.

Enjoying his life in Germany

The journalist and filmmaker pulled through the hard times and finally has the chance to enjoy his life in Germany. He admits that he has a very good time living here and he enjoys getting to know completely different perspectives, now that he understands the society better. “Apart from everything I have said so far, there are so many opportunities in Germany. I have my circle of friends; I don’t need to search for new people anymore. I have a life now that is already settled. I think I want to stay a little bit longer in Germany,” he says with a big smile on his face.

Additionally, he finds Germany to be very beautiful. Even though the people tend to be reserved, they are also polite. “A funny thing is that they don’t take risks at all. They don’t just jump into things. They plan it,” he says and adds that the Germans avoid taking risks also when praising.

“If my boss tells me, that something is good, it means that is Extremely good. They are almost like five steps behind from the reality,” Abu-Bakarr describes cheerfully. “The best you can get most of the time is just: “Danke Dir”. Pretty much thank you. That is it. That is already extremely good.”

7 thoughts on “Taking the long road of integration”