At the beginning, the project seemed quite complicated. There was however, a great level of openness, says director Britt Beyer in radio interview.

As part of the Intercultural Week 2014 in Bonn, the documentary film Werden Sie Deutscher (Become German) was shown at the Internationale Begegnungsstätte to a small, mostly German public. Over a period of 10 months, the director Britt Beyer accompanied 15 adults of different nationalities in their integration and orientation course (600 hours of language learning and 45 hours of ‘orientation’) at a VHS school in Berlin.

The documentary also follows some of the participants in their day to day living outside of the classroom. The viewer accompanies the troubled young Bangladeshi, Shipon, for instance, as he navigates the hermetic, foreigner-unfriendly ‘Ausländeramt’ (Immigration Office) with his German wife and the constant threat hanging over the renewal of his temporary residence permit. The authorities suspect his marriage is a sham and conduct several checks as well as interrogations to ascertain the contrary. On a lighter note, Jorge from Argentina tries to overcome the administrative hurdles in his desire to open a bar/restaurant in Berlin, battling with both the language and countless requirements. Despite his experience in French and African cuisine, he is soon confronted with the challenges of finding work in the kitchen. Then we meet the Palestinian Insaf who has been living in Germany for 20 years and who still has problems expressing herself in German. At her home which she shares with her husband and grown-up kids, she confesses that the uncertainty of their situation and the constant fear of deportation (temporary permits which were renewed for short periods – 3 or 6 months – over more than a decade) did not convince her of the necessity of learning the language. In the interviews given by Beyer, this concern is unsurprisingly raised – how is it that participants still can’t speak the language after having lived here for decades? The director laments the tardiness of this government-subsidised, obligatory course for immigrants but also expresses some skepticism about its effectiveness in integrating the participants in German society. The documentary film Werden Sie Deutscher therefore offers an interesting and much-needed starting point to the debate on the integration model and its success in Germany.

As a former VHS Köln language student myself, the scenes played out were quite familiar to me. Nonetheless, the specific curriculum created to respond to the needs of ‘Zuwanderer’ (immigrants) residing in Germany and the preparation for a final exam (which is directly linked to the extension of one’s residence permit or in some cases, access to social benefits) set this course apart from the many other ‘German as a foreign language’ courses offered by language schools. An integration course for immigrants was commissioned by the Ministry of Interior in 2005 and was jointly developed from 2006-2009 by the Goethe Institute and telc GmbH.

The content of the course itself not only raises questions about the construction of Germanness but also the image and needs of the migrant participants. According to Rita Süssmuth, president of the German VHS Association, the test and newly developed curriculum outline are meant to couple the learning of German with the practical, daily experiences of the immigrants. She therefore sees the integration course as having a real connection and relevance to the lives of the target group and directly contributing to their integration and participation in German society. After having watched the film, Süssmuth’s words ring hollow. Furthermore, from the listening texts played in the classroom – one example includes a woman calling to get details about a cleaning job – one gets the impression that it targets poorly qualified migrants in search of low-paying jobs. The director nonetheless admits that quite a few of the participants were university graduates. In her commentary following the film release, she further draws attention to the `supposed weaknesses‘ of the migrants portrayed in the textbook – Jurij (Russian?) is lazy and puts pleasure before work, while Mahmut (Turk?) is a chatterbox who distracts the others from their work. Counteracting such `defects‘ are the German virtues. In other words, Beyer points to the assimilatory nature of the subtext, which she describes as a `Zähmung des Fremden‘ (taming of the foreigner) – whoever wants to live here should follow our ways. 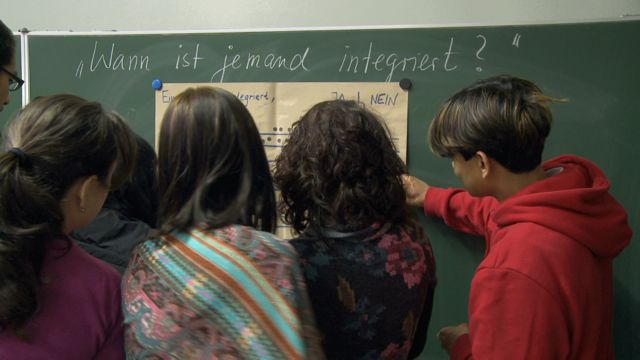 In the documentary film, Beyer leaves it up to the viewer, however, to decide whether the goals and objectives for the integration of immigrants have been met. Nonetheless, some ironic snippets, such as the German national hymn played in the classroom and the religious rendition performed at the closing ceremony when the certificates are awarded, (in)directly parody the image of Germanness promoted in the course. What’s more, the ‘seriousness’ of the lessons on German identity, culture and values, and the pressure to pass the compulsory exam at the end, sharply contrast with the popular, ever-increasing lists of books poking fun at Germanness from an outsider/foreigner perspective. The Xenophobe’s Guide to the Germans (2008) by Stefan Zeidenitz and Ben Barko or How to be German in fifty easy steps (2013) by Adam Fletcher et al. are but two examples.

Firstly, the fear of foreigners must be dispelled. Prejudices and stereotypes should be shed and then, what’s most important is having an equal opportunity both in education and in the job market.”

In her interviews and commentary on the film, director Britt Beyer admits that out of the 20 participants who started the course, only four of them managed to successfully complete it. Whereas for some, the workload proved to be too overwhelming, others chose to return to their countries because they felt things were not working out in Germany. In her ten months of ‘field’ and film work, the director came into contact with forty different participants, some of whom she accompanied in their daily routines. Yet, the high failure rate in the course is not mentioned or addressed in the documentary. Britt Beyer appeals, instead, for a greater mutual understanding and an embracing of cultural plurality and different ‘identity claims’. Her hope is that Germans see migrants and migration not as a threat but as an opportunity.

The film Werden Sie Deutscher has travelled to several international festivals and in 2012 it won the New Berlin Film Award for best documentary. It also took home a prize at the Osnabrück Film Festival.