So much has changed that I can’t believe it’s only been a year and a half since my first interview. I’ve got back into teaching, which I never expected I would do, and I have loved it more than I ever did in the U.S.. Due to a few hateful social media posts I’d seen about refugees and Muslims, I decided spontaneously one day to get involved and see what I could do to help. I attended a few meetings, visited a local language school, attended an international Kaffee und Kuchen organized by a local couple, and the next thing I knew I had a job teaching beginning German to a group of very motivated refugees from Syria and Eritrea. I am now teaching Integrationskurse at the local VHS.

I have also started a project interviewing refugees about their stories – their lives back in their home countries, their journeys to our town, their experiences within the last year, and their impressions of Germany and Germans. They have been open and willing to share their stories with me, and it is so important that they be heard.

Have your ideas about how Germany and Germans changed since our last interview?

Not really, but I have actually had more contact with Germans through my teaching and the Freundeskreis-Asyl in my town than I ever had before. The locals who have gotten involved with the refugees in our area and are helping them integrate are such warm and giving people. I didn’t have the impression before this that Germans are cold and distant (as many seem to think), but what I have seen is that many are more generous and caring than even I realized.

Tell us about your experience with refugees…

Those I have met and know personally are warm, caring, smile easily, laugh despite what they’ve been through and being separated from their families, and they are working hard to learn German and integrate. They want to learn and work, they do not want to live off the state, and they are tired of waiting (for an opening in an integration course, for official recognition and work permits, and for an end to this damn war). They have been learning how important degrees and titles are in Germany, that punctuality is key in interactions with Germans, and that rules must be followed.

Many have told me it seems life in Germany (Swabia) is mainly about Arbeit und Termine (work and appointments).

Social interactions and visiting is much more informal and relaxed in Syria, from what they tell me, but they’re getting it, and they’re helping each other as well. I know several Syrians who help as interpreters for friends, acquaintances, and newcomers whose German isn’t as advanced as theirs. What they have learned in one year is astonishing. Obviously some work harder than others, but I have yet to meet a refugee who has the attitude that he won’t or can’t learn German. In contrast, I met an American a few years ago who’d been living here for 4 years, and she said she couldn’t learn German because everyone around her spoke Swabian. Huh?? 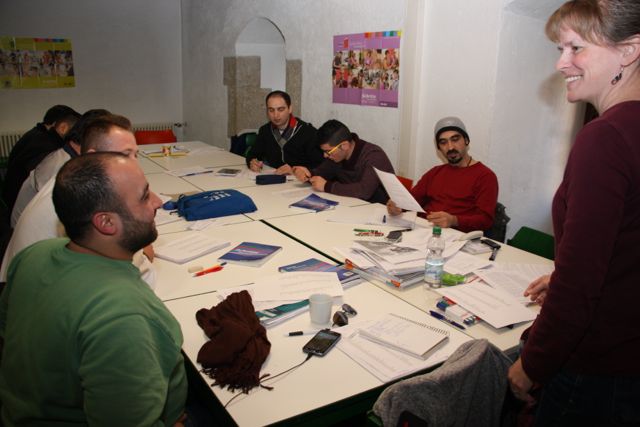 What strikes you most about the attitude of the German people towards the refugees?

The people I’ve seen and interacted with have warm and open attitudes. They can laugh at themselves and realize that Germans are quirky and set in their ways, and they’re doing what they can to help the refugees fit in. Many community activities have been and continue to be planned to bring locals and refugees together – sharing food, music, culture, film projects, and information.

Where there are problems I think they are usually based in fear. That was what originally motivated me to get involved. After I read some anti-refugee/foreigner posts from Americans at the height of the refugee crisis in Germany, I had to wonder, “What are you so afraid of?” and I set off to find out. As soon as I met and spoke with them, and especially within the first few days of teaching, I knew there was nothing at all to be afraid of. A different culture, a different religion (in some cases), a different language, different customs…we can learn so much from each other.

Has Germany changed since the influx in refugees coming in?

It has in some ways, though in my daily life nothing has changed. One can’t watch the news or read the newspaper without finding stories about the plight of the refugees and their struggles – and success stories! – here in Germany. I have to laugh at the comments sections of various articles from American news sources – I have often read, “Just look at what’s happening in Germany and you’ll see why we need to [turn our backs on refugees].” What exactly do these people think is happening in Germany? When I look out my window and drive into town, I can see little that has changed. If I looked for problems, I’m sure I could find them. But I look for and see good things that are happening.

My life has been enriched by the local volunteers and refugees I have come to know.