What do you mean, not all men sit down to pee?

I am Niklas, a 27 year old German, currently studying and living in Copenhagen. I’ve spent more than 2 years building new ventures and in my spare time I have a fable for surfing, art and chocolate.

How and where did you get the idea for your book “German Men sit down to Pee“?

Working with expats that were living in Germany, I realised how little they knew about Germany and how they were often surprised by us Germans and how things work around here. There are those typical clichés that we are punctual, rule-obedient and so on and while living or traveling in Germany you realize that these clichés definitely have some truth to them. But you also realize that there is so much more to discover beyond these clichés. My co-workers were often surprised, shocked, frustrated and enlightened and being around them I was able to discover Germany from an outsider’s perspective – it allowed me to see things from a new perspective that I always thought were completely normal. For example: having 5 different insurance policies when you’re in your mid-twenties seemed to be the most normal thing in the world for me!

What is the main scope of the book?

It started as a collection of funny facts about Germans. At the beginning the collection was just for myself on a little notepad. But I kept finding new things to add. At some point there was so much information there that I thought I should share this information with somebody else. In spring 2015 I met with and spoke to James, who was living in Berlin at the time. He really liked the idea and I asked him if he’d like to be a co-author. As an expat himself, James also brought with him his perspective on Germany and of course his Irish humour, which has made a huge difference to the book. I thought the stuff I was writing was very funny, but then I saw what James could make from it.

Why do you think our international readers should read it? 😉

Berlin and many other German cities are becoming more and more international as people come here for work, love, or just to see our old houses, beer and sausages. And most 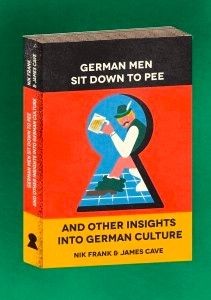 people really like it here as well. But there’s a lot more to German culture than just beer and sausages. “German Men Sit Down To Pee …” is a collection of those differences with sprinklings of German-Irish humour as well. If you are moving to Germany or just have a general interest in German culture this book will not only present the clichés but take you on a deep dive into “German-ness” giving you explanations as to why we are the way we are. I’m obviously biased but I think the book is very insightful and entertaining and offers some great insights into the modern German mindset and culture.

Why would a German write a “critical” piece on the Germans?

I would not call the book a critical piece, even though some people might think so from the title and the way it is written. It is a self-ironic book that contrasts the cliché that we are such serious and un-funny fellas. And, as you will find in the book, it is actually very German to be critical of everything, including yourself. In the book we have tried to highlight both the upsides and the downsides to everything. There is definitely a lot that is really great in Germany and of course – as well as in every country – things that could be better.

Could you give us your favourite part/quote from the book?

There are a few little parts that I like such as how important it is to know whether to address people formally with “Sie” or informally with “Du”. Even for us Germans this is incredibly tough to get right, as some people get offended if you don’t address them properly and see this as a sign of disrespect. Others are offended if you do address them formally, as they don’t want to be perceived as stiff and old. So the chapter does not come short in pointing out how ridiculously complicated etiquette in Germany can be at times. Another chapter I really like is the one about Germans idolising Scandinavia. I am a pretty hard case myself. And James did not come short of really rubbing that chapter in my face.

So why do German men sit to pee? 😉

For us Germans the question is more the other way around: What do you mean, not all men sit down to pee? That’s something that really comes to a surprise for many Germans. At least if you are at somebody’s home where it’s considered rude to pee while standing. So, I won’t spoil too much but there are even court decisions about this topic and little electronic gadgets that will remind you to sit down when taking a wee. You can say a lot about Germans but you can’t say that we aren’t witty and well-organised when it comes to enforcing rules!

We are currently working on getting the print version of the book out, which will have illustrations in it as well. Our designer Bruno, who goes by the name Mantraste, did an amazing job on the cover and we would love to have him illustrate the rest of the book as well. Besides the book, I am currently doing my Master’s degree and am quite busy with that. However, I always try to achieve three larger goals per year (how very German of me!). Last year was writing a book, doing my master and starting my own business, which I am still working on. I have not finally decided what those three things will be for next year, but maybe writing a new book. This time not about Germans however.

Hey there! My name is Jenna Davis and I’m a Canadian born travel blogger and