You know, my composition teacher actually once told me: “Your way of composing music sounds very German…. you are composing some very structured German flamenco.”

Why would anyone decide to quit a good job of an IT professional nowadays? Why would anyone want to quit the job and decide to leave a life as a musician? Find out here in the following interview with Cristián Varas, a former computer scientist from Santiago de Chile who turned into a brilliant guitar player in Berlin and is happy of his choice!

When did you start playing guitar Cris?

I started playing classical guitar long time ago in the 90ies, when I was in 7th grade. My music teacher saw that I was super motivated first to play the flute, and then she just recommended a teacher for me to learn how to play the guitar. That is how I started and never stopped (smiling –ed.).

May I ask what brought you to Germany?

I came to Berlin about ten years ago as an engineering student with an exchange program from DAAD. It was too difficult to study both music and computer science, I was not sure what I actually wanted to do for living and probably because of job opportunities I had decided to take the road of an engineer, putting aside music for some time. I liked Berlin a lot, so I simply decided to stay. I also made my Chilean studies recognised and continued studying in the Humboldt University, then found a job as an assistant researcher (Hilfswischenschaftler – ed.) at Fraunhofer Institute for Open Communication systems.

…and then after so many years as a researcher you decided to quit your job? Just like that?

(Laughing – ed.) The last year I worked there I got very demotivated with my job. I simply was not seeing anything exciting in working on those projects…. I just could not find that passion, that drive that I had and have for music now.

I also discovered that I could play better than I thought…I started learning difficult pieces for classical guitar and they turned out pretty well. I started showing my pieces to people and got many compliments. I was also asking for opinions of other musicians and they were all very positive and excited about my music! I don’t think I realized what was going on…it just happened. Music came in just in the right time…

Are you happy about the decision made to quit the job?

Absolutely, it is the real me! I get up now even before the alarm clock because I think of doing all those exciting things with music and I simply love it! I was really scared when this all happened…and then I let myself carried around Berlin encountering great musicians. And you see, I am still here, happily playing my music!

What projects are you currently working on?

I’ve been working with Aletchko for some time already. I am also doing my own projects with my own compositions, playing with Wit Pollack – a great trumpet player. I also work with the singer Luise Bestehorn playing a mix of Jazz, Bossa, Tango, Latin and Classical Pieces. My compositions can be characterized as a mix of Latin American and Oriental music with a touch of jazz. 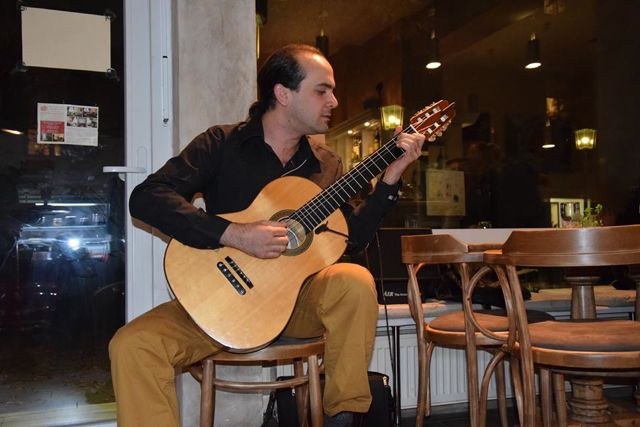 Has your music been influenced by the German culture?

To some extent. You know, my composition teacher actually once told me: “Your way of composing sounds very German…. you are composing some very structured German flamenco.” (Laughing – ed.) It’s hard to explain what has actually influenced my music! Latin America, sure, I come from there. Also, if I think about it, this multicultural environment in Berlin is probably the most influential factor.

How do people perceive your music here?

When I say that I originally come from Chile, people right away think of something like salsa, and I say: “Noooo, I play flamenco!” And the reaction is like: “Oh, in Chile, like in Spain, you do too play flamenco music.” Then I have to start explaining that the Flamenco music world in Chile is even smaller than that in Germany itself!

Would it be possible for you to be a musician in your home country?

Chile is difficult for musicians. To give a proper answer to your question, I would have to speak about the dictatorship and the oppressed cultural world…. My Chilean musician friends tell me not to come back. Sad, but true. I am in a great place to start expanding globally. Maybe, at some point of my life it won’t matter where I live, I’ll be travelling anyway… but right now I am good.

How is your German?

How do you find Berlin?

Berlin is pretty amazing with such a mix of cultures and ideas that open up the world for you. The city never sleeps, you go anytime somewhere and something will be happening! Berlin is different from any other German city. It’s one of a kind. People tend to be less friendly here…at least, it seems so at the beginning. They are very straightforward, but I have learned to like that roughness because they are just being frank and are not trying to be fake.

Do you miss Chile?

My wife, who is half Chilean and half Italian, moved with me to Germany and has been very supportive during this transformational process. We are doing great here! Things are just fine! I don’t really miss Chile itself that much, just my family of course and for sure, we would like to visit Latin America  more often. One dream I have now is to go to Chile and present my new self and my music (smiling – ed.).

Does it happen that you don’t play for a couple of days or weeks?

It does happen sometimes, you let your arms rest, but if I am not playing guitar, I am definitely working on something else, like fishing for ideas. I actually had to learn to give myself a break. I had to learn not to blame myself for that. In life, we all need to breath in and breath out, you can’t breathe in eternally…

What does music mean to you?

It is really hard to put it in words. It is like platonic love. Now that I live my life as a musician, I work more on the ideas and aesthetics part, not the technical part that much. I am absorbed completely and I often find myself doing music even without instruments.

Where does your inspiration come from to compose?

It all depends. I remember once I actually got out of bed to write something… I was sleeping and an interesting idea came up, so I just wrote a song…

Thanks for the interview Chris! Good luck with everything. I see that the future looks bright!

Thanks. I will take care of making it shine!

You can find more interesting stories&interviews about international and German musicians on Postrwall!