The migrant suspects reality: having experienced several ways of being, he understands their illusory nature. To see things plainly, you have to cross a frontier, says Salman Rushdie. Are things really plainer when a frontier is crossed? Reality is certainly perceived differently for those crossing borders. This is particularly so when a person moves from a legal to an illegal status and has to constantly dodge the police and find creative ways to make ends meet. The Surprising Europe televised series boldly and unprecedentedly takes an inside look at the lives of African migrants in different European locations. This two-part review descriptively focuses on some of the stories covered and considers its possible resonance and potential to overturn entrenched stereotypes about Africa and Europe.

The television series Surprising Europe has been sponsored by Al Jazeera English, HUMAN, the Dutch Cultural Media Fund, the Dutch Ministry of Foreign Affairs, This is Africa – a forum for arts and music, as well as the film production company Jongens van de Wit. It aims to inform viewers about Black African migrant experiences in Europe. It is directed by Jean Hellwig, Rogier Kappers, Kay Mastenbroek and Alex Goekjian and explores various portraits of Africans in a television magazine style. Surprising Europe premiered in August 2011 on both the international news channel Al Jazeera English and on the Dutch public television Nederland 2. According to the host, K-Nel, it is the only television series that ‘shows the true lives of African migrants in Europe’. The host, who is an artist and entrepreneur, is himself a migrant who came to Germany as a student at the age of nineteen.

The series seeks to present both the good and bad sides of life in Europe from a clearly African point of view, focusing on documented and undocumented migrant stories from different countries and contexts. It delves into the hardships of life in Europe and focuses, among other themes, on the precarious working conditions, racism and discrimination, the struggles to change migration laws, mixed relationships as well as the music and culture Africans bring to Europe and the syncretic styles that are emerging. Some of the highlights of this nine-part series Surprising Europe include a musician featured in each episode in addition to a parallel story of the Ugandan photo-journalist Ssuuna who decided to travel to Europe to experience the migrant reality first-hand. In the website of one of the series’ sponsors, This is Africa. The voice of a new generation (a leading forum for African opinions, arts and music based in the Netherlands), we learn that after over-staying his tourist visa in Holland, the reporter Ssuuna from Kampala joined the ranks of those undocumented Africans in Europe. His negative experiences prompted him to project a more realistic image of African migration to those back home tempted with lies and falsehoods to journey to the ‘Promised Land’. In fact, the slogan ‘No more lies’ accompanies the Surprising Europe title and it was born directly out of Ssuuna’s experience. More specifically, his idea took shape when the reporter was confronted with the crude realities in Amsterdam which did not conform to the image he had cultivated back home. The death of eleven people in a detention centre at the Schipol airport in 2005 was a turning point for him. He realised that people did not know what awaited them in Europe and that the decision to travel there should be carefully considered and weighed through first-hand information and personal real-life accounts. He proposed his film project, which he wanted to show in Uganda, to a Dutch production company and the idea was enthusiastically approved. The television series is the main part of the Surprising Europe project that started with the documentary Surprising Europe, The Life and Times of Ssuuna Golooba and ends with the online community .

The documentary premiered at the Movies That Matter film festival in The Hague, Netherlands. Ssuuna’s experience during the screenings in Uganda convinced him that Africans needed to ‘know the truth’ about life in Europe. African audiences are therefore targeted and one of the primary underlying aims is the hope that such projects will dissuade African migrants from risking their lives and living undocumented in Europe. In an interview with reporter Femi Akomolafe in 2011, Ssuuna Golooba describes the audience reaction to the series as expectedly mixed; ‘many Dutch people are truly shocked that people exist (not live) in such conditions in their country. Many Africans find it courageous that I came out to tell a story to which they can relate. Some of them however think that it will jeopardise their status. But that’s life’.

The episodes highlight, among other themes, the different ways migrants enter Europe illegally, concrete cases of despair, limited access to housing and healthcare, exceptional examples of successful migrant profiles, taboo jobs in prostitution and drug trafficking, ongoing changes in Africa due to remittances, coping in a mixed relationship, identity dilemmas of second generation migrants, tricks such as ‘cloning’ to survive without documents in Europe and taking action to bring about an improvement in the Black African migrant condition. In one of the later episodes, the viewer is introduced to some asylum seekers in a detention centre where they are kept while their cases are being processed. Presenter K-Nel notes that 9,000 people requested refugee status in the past ten years (up to 2011) in Malta and half of them still live in detention centres or tents. In the episode ‘Running out of luck’, several refugee seekers in a detention centre in Zeist, Holland are interviewed. K-Nel informs the viewer of their permission to film and speak with some of the detainees after lengthy negotiations with the Authorities. The interviewees express their frustration and denigration in the centre. One of them condemns that ‘they treat us like animals. If you don´t do what they want, they will beat you’. Another interviewee complains about always being handcuffed even under examination at the doctor’s office, while yet another detained African describes how he was prohibited from witnessing the birth of his child. They all discourage those viewing from coming to the Netherlands and one of them concludes that ‘to come here, you must really be stupid, very stupid’. 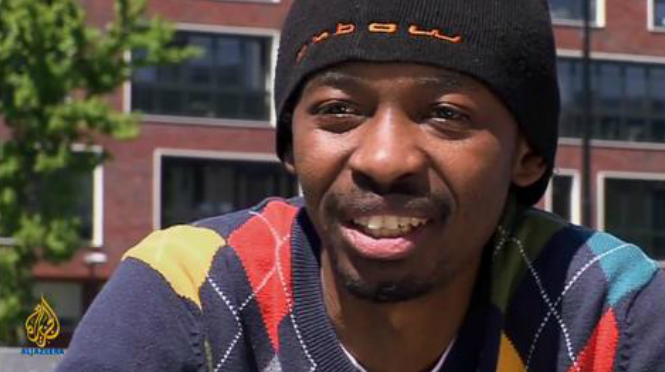 Fake relationships and the desperate struggle to stay in Europe are also covered in the series. In ‘Running out of luck’ we meet a friend of the Senegalese artist and reporter residing in Berlin, Sister Fa, who gets herself pregnant so she could stay in Germany; ‘I had to get married or have a child to stay here’. Another example is a student from Senegal who tries to get married to his German girlfriend in order to prolong his stay in Berlin. He recounts the refusal of one lawyer to take up his case on the grounds that his relationship was a sham. While another lawyer is handling the case, Samuel is forced to pack his bags and return to Senegal with his broken dreams and failed projects as his student visa expires. Tricks to find work as an undocumented migrant are also seen in some detail. In the ironically titled episode, ‘Taking action’, a guest reporter in London gives us an insider’s view. He goes undercover and ‘becomes someone else’ to show the audience how ‘cloning’ works. The trick involves borrowing the documents of a ‘legal’ friend to get a job and playing on the inability of the employer to distinguish among the Africans. The reporter clones someone else’s identity and successfully gets a job in a care home. Later on, he tags along in a police raid and the viewer sees officers pulling out several undocumented workers from a butcher’s shop.

The viewer learns that there are officially four and a half million Africans who work and study in Europe, plus another seven to eight million who live there unofficially, ‘without papers’. In the second episode, we meet ambitious students and follow the success stories of some migrants like Steven from Ghana who came to Bijlmer, Holland as an undocumented migrant and became a successful entrepreneur. He underlines that before you can compete ‘with the Whites’, you have to be four times better than them. We follow Steven as he shops in exclusive stores and dines in fine restaurants, all the while sharing his story of how he moved up the ladder of success. This success story, however, is immediately dampened by the experience of another Ghanian seasonal worker in Lleida, Spain who has been forced to sleep on the streets for over six months because of the crisis in the construction industry and the unreliable fruit harvest. In his present condition, he reveals that Ghana is better than Spain.

Discrimination and racism are also raised in the series. In the episode entitled ‘Culture shock‘, the presenter introduces the challenges faced by migrants caught between different worlds and the hostility Black Africans are sometimes faced with. In this feature, Western dominant perceptions that reduce African migrants’ identities to either victim or unwanted outsider, are criticised. Guest reporter Ade Bantu is a Nigerian living in Köln and introduces the viewer to the ‘darker side of migration’. He presents different views of Black Africans in Germany and notes that since 1989, there were more than 140 racist-motivated murders. Bantu, in collaboration with other artists, recorded a song ‘Adriano’ in memory of one of the victims. While we hear the music and see pieces of the video, there are other accounts of those who suffer discrimination like that of John from Uganda. Another German participant Angela Camara underlines that some of the main prejudices against Africans include drug dealing, violence and fake relationships to obtain residence permits. Camara shares her own near-violent encounter with skin-heads who spat at her and yelled ‘you are sitting on a white seat’.

Do these representations of migrants and Black nationals in Europe simply corroborate dominant images of the Black African (clandestine) migrant? Does this intentionally conscious reporting with an educational aim actually over-simplify the reality of migration by attaching too much focus to the illegal aspects? The series undoubtedly nuances and challenges dominant representations by including the multiple voices speaking out from different locations and contexts. The power of its intermediality and the diverse threads generated contribute to its uniqueness and varied reception. The role of the website forum, for instance, is of key importance and has become a fundamental space to share ideas and experiences as well as empower Black African migrants. Information about laws and other practical advice is shared, viewers post video comments from various points and relevant articles are continually uploaded.

Previous Post
An attractive idea
Next Post
My name is Albert, but please without “t” at the end