In the Facebook Expat Community I am mostly known as “Elisa Stella – Expert Expat Assistant”: I am an Expat myself, I feel at home in Düsseldorf and actually in any place where I understand the language.

I was born in Italy, moved to Asia in 1984 – came back to Italy 1988, then Berlin, China again, Milan, London, then 2007 Nuremberg (Franconia, Southern Germany)… In Düsseldorf (Rhineland) since 2011. Meanwhile I learned English and German, some French and a bit of Mandarin as well.

After pregnancy, my professional versatility consists mainly on two activities. In short:

My skills and expertise are also useful for smaller companies who want to approach the market strategically, that’s why I also have start-ups founded by Expats in my client portfolio.

In addition, I teach Economic Anthropology and Market Reseach at universities.

I love both my professional activities. I had studied hard for both: 2000 I earned a BA degree in Marketing and Communication, then in 2010 I attended a Master in German Social Management. As a volunteer for the German Red Cross (refugees dept.) I attend several trainings related to migration topics and migration-psychology.

What brings you to Germany in the first place?

Career. I was relocated from Milan to London and then to Nuremberg. At those times I was Senior Consultant in a multinational consultancy company and then in a communication network working for global accounts. I used to travel a lot every week.

Do you feel yourself integrated in Germany? … whatever integration means to you…

And “integrated” to me means being on equal footing with the locals, accept them and be accepted by them.

This feeling is mostly a matter of language and experience, which make one empathizing with locals, express oneself like others and not be surprised (anymore) for their (“odd”) habits and believes.

Other individual differences depends on one’s personality, no matter what nationality.

What initial difficulties/problems you faced when you moved to Germany?

Human relations were non existent in Franconia! Franconia is a region known for being very reticent, skeptical and narrow-minded, not open and not empathetic at all. This made me feel depressed because at the beginning I thought it was my fault… then I revised my opinion because it is the common mood there.

Some examples: I worked with some colleagues for years and did not know anything about their private lives, if they had family or children, small talks where not appreciated. Or when I made little jokes with neighbors’ children in the hallway, their parents told me “my child does not speak to strangers” and I had been living close to their door for three years!

Weekends were a nightmare of loneliness. Sport and studying were my reaction, to keep body and brain healthy and alive.

Living in Düsseldorf is much better: Rhineland is known for being one of the friendliest place in Germany: people are talkative and more tolerant! Even if it is not as tidy and clean as in Franconia/Bayern, I experience more human values and empathy here. 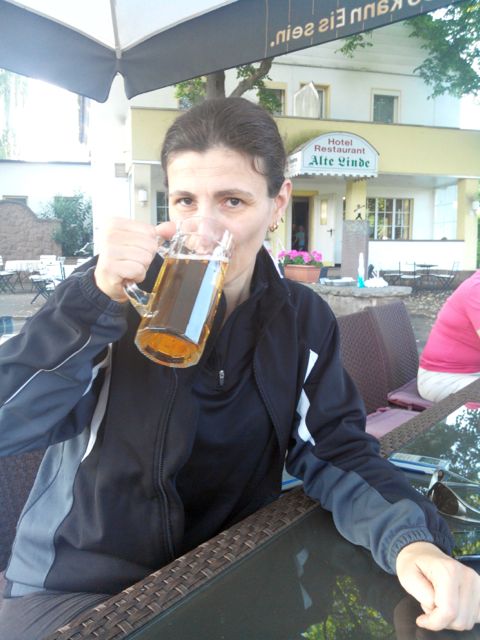 What impressions did you have about Germany before moving here and has your opinion changed after living here for some time now?

Before settling down in Germany, I was impressed by efficiency, reliability, order and I thought Germans had interiorized a sense of respects for others better than other nations had.

After 10 years here and having experienced several situations, I realized that efficiency is a farce: procedures are not efficient in sense of “problem-solving”, common sense is not common and logic neither: it is more relevant to stick to a procedure than to solve problems.

As far as the superior respect of Germans for others, I realize that respect is based on the fear for punishment, not on a major sense of justice interiorized. It is not a respect for others in absolute terms: as soon as the other shows some weaknesses or does not show any defense, he becomes the perfect victim for abuse. For instance, if your landlord assumes you are not aware of your rights as a tenant, he would abuse of this making you pay more or charging you for repairs.

I passionately work for Expats because I want them to avoid these unpleasant situations and because I am glad if they appreciate the best “Germanness”.

Are there things in Germany that you still have difficulties accepting/getting used to?

Not really, I got used to German bedsheets (short and small to me), 10-month-winter and people complaining for the excessive warmth when the temperature reaches 25 degrees!

Two things still annoy me, but I can live with it.

Exhausting slowness with bureaucratic procedures is a nightmare, so slow that they do not keep the pace with real life. For instance, it happens than one fills in forms for some authority and send them out. When the authority reacts, things have already changed and the answers do not fit anymore! Such a mess…

Düsseldorf, where my daughter goes to Kindergarten and we have a good parents&child-network.

What’s the first thing you do when you go back to Italy?

Milan is the place where I lived at longest (11 years), but when “I go home” it means that I visit my parents, who live close to Vicenza (between Garda Lake and Venice) and where I spent some of the high school years. My mother provides my daughter and myself always the deepest warmhearted family feeling: this is “home”.

Is Germany a multicultural society in opinion? Can multiculturalism result in a country loosing its own identity?

In terms of statistics, yes. Germany is a multicultural country. In terms of gastronomy, it is also a multicultural place –real integration seems to occur in people’s stomach: pizza, döner, frittes, Asian wok and curry are by far more popular than “Schweinhaxe” (knuckle of pork) even among Germans.

In terms of social interaction, I fear it is not very multicultural: I seldom experience friends’ click of mixed cultures (except pupils in public schools) and I am the only foreigner when I meet my German friends at their homes.

On the other hand, so many Germans have migration-background, that some are not even aware of it. For instance, those lately repatriated from former Soviet Union or eastern countries after 1990. They were born in Poland, Russia, Romania and now have the German citizenship, while originally they belonged to the German ethnic minority in their home country.

In terms of qualified professional life, Germany is for sure not a multicultural country! Due to a strict mindset of companies which hire only professionals with German “Ausbildung” (e.g. education path) and “Zeugnisse” (e.g. references by law), foreigners have great difficulties to access qualified jobs. Companies do not dare to break the rules of the hiring process, are skeptical and still prefer safe choices hiring those matching the German requirements (no matter their practical ability).

Would you go back to Italy? if yes under what conditions?

No. Going back to Italy is not on my plan…

The country suffers since decades from a social, political, economic and structural crisis, beyond the point of non-return. Over 120.000 Italians aged below 30 left Italy in 2015: not only brain-drain as it happened before, indeed a real economic diaspora of desperate youth and families. These provide cheap manpower for more or less legal jobs abroad and this sad phenomenon affects Germany a lot.

I love Milan, the liveliness and the cultural heritage of Italy, though daily life would be impossible: disregard of rules, non-existing justice, lack of public services, couldn’t-care-less attitude. Salaries, if one gets a salary at all, are below dignity.

I’d love my daughter to appreciate the masterpieces of art and literature in Italy, visiting places like Venice, Rome, Florence and surroundings. The ideal condition would probably for her to attend an exchange-year during the high school, choosing for her an adequate environment.

Previous Post
We moved to my parents’ country of origin