I’m not turkish, but my husband is

In a capital city marked by transformation and transience, where people are perpetually coming and going, it can feel like a true rarity to meet someone actually from that city.

“H” was my first Berlin friend from Berlin. We met through a language website, after she sent me a request to practice French in exchange for German. H was working on her degree to become a French teacher. I was still new to the city and could count my local friends on one hand. The first time we hung out was in February 2012 at a cafe under the Savignyplatz S-Bahn arches. H ended up helping me with my research on teacher quality in Germany, and I gave her tips for her upcoming study abroad program in France. Soon enough our linguistic meet-ups evolved into a friendship that waved off grammar practice in favor of relaxed Sunday afternoon coffee dates.

Our relationship also became a kind of exchange of culinary cultures. I started joining her annually to break the fast during Ramadan. As the resident atheist I wouldn’t fast before these meals. Yet I’d still be the one gnawing away at my fingers until sundown, while H and her sisters waited patiently for their first sips of rose flavored water and soup drizzled with fresh lemon juice. In return, H  joined my international crew of friends for her first Thanksgiving dinner, initiated into the world of cranberry sauce, candied sweet potatoes, and general American gluttony. Her contribution – mounds of Turkish Lahmacun (spiced lamb pizza) – was eagerly divvied up like party favors at the end of the night. 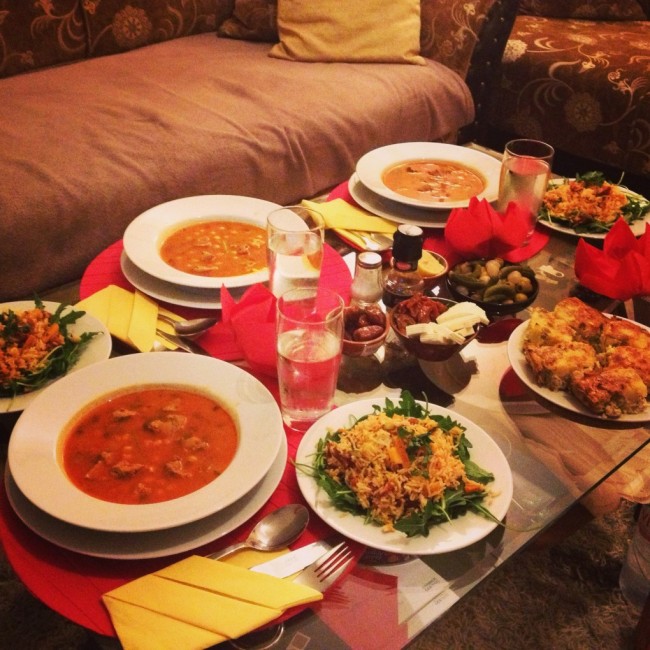 It didn’t take long for us to discover our mutual fascination with questions of citizenship and identity. We attended several events together on the topic and often spent our cafe time discussing our hybrid families and understanding of Deutschsein or “Germanness”. See, while H is a true Berlinerin – she was born and grew up here – her parents are from Tunisia. We shared the feeling of having more than one home; while I straddled the Atlantic, H had a foot on either side of the Mediterranean. But unlike me, H had grown up with the challenge of having to persistently defend her Germanness, to the wider community and to her own parents.

In countries like Germany that are still embracing their multicultural identities – Germany first recognized itself as a country of immigration in 2005 – too many still have a binary understanding of native vs. foreigner that acknowledges bloodlines over birthplace and physical appearance over personal identity. There remains a habit of probing those who look “different” about their roots, otherwise known as the dreaded “But where are you really from?” question

. Those on the receiving end of this question are often referred to as the “perpetual foreigner”, ethnic minorities who will always be seen as the “other” because of how they look.

In H’s case, it didn’t take long to notice that the vast majority of those she came across assumed she was Turkish, including other Turkish-Germans. “Oh right, the Turkish one,” a girl on her basketball team responded, when I introduced myself as H’s friend. H once told me she gets asked if she’s Turkish more than her best friend, an actual Turkish-German who happens to be blond and fair-skinned. 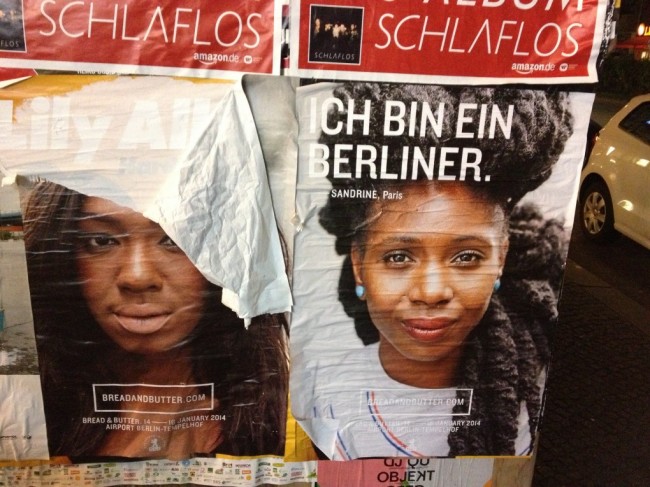 The confusion isn’t all too surprising, considering H’s darker features, for one, and the demographics of the city, for two. Turkish-Germans are the city’s largest ethnic minority and the largest community of Turks outside of Turkey. Estimates of the number of Turks in Berlin range from 200,000-500,000 (a combination of those with Turkish passports, partial Turkish ancestry, and ethnic minorities from Turkey). A far cry from the approximately 1,500 Tunisian nationals in Berlin.

The story of H’s parents also mirrors that of many Turkish-Germans. They immigrated to the city separately as part of a guest-worker program in the 1970s and met on the job at corporate giant, Siemens. Originally, they planned to return to Tunisia together. The couple worked 2-3 jobs, sending remittances to family in Tunisia to save up to build a house there. They sent their 3 eldest daughters back for 9 years to live with relatives and go to school. But when Germany tightened family reunification laws in the 80’s, excluding those older than 16 without German citizenship, they brought the 3 girls back to Berlin to keep the family together, by then consisting of 5 daughters.

H is daughter number 4 and has only visited Tunisia on vacation. She admits that a distinction exists between the older and younger sisters, due to this geographic divide in upbringing, especially apparent in attitudes toward the headscarf and family planning. Her oldest sister “lives by the Qu’ran” and hopes to move back to Tunisia permanently one day. H, on the other hand, identifies as a “Berlinerin with Tunisian roots”; she has no intention of leaving Germany anytime soon. 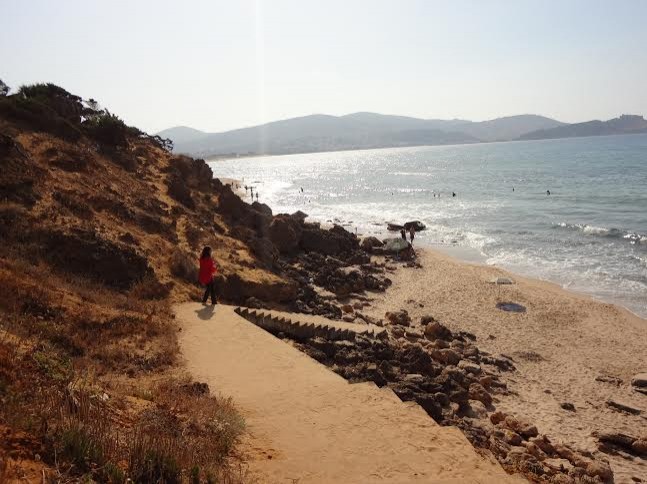 When it comes to questions and comments about her being Turkish, I’ve only ever seen H respond with patience and grace. It’s the difficulties with her own parents, and especially mother, that affect her most. If you ask her about her upbringing, H will tell you that her parents were “pretty modern for immigrant standards”, letting her play sports and stay out with friends until 10pm. Sleepovers and clubs weren’t allowed, but H found ways around her parents’ rules, such as working at social events like the Volksfest and later heading west to Dortmund for university.

Boyfriends, on the other hand, were out of the question. Particularly those outside of the Tunisian-German community. H dated a little in secret, but didn’t get serious with anyone until she met “A” at 19. At 28, A was almost a decade older and managing a series of internet cafes. The flirtation started small with jokes at the shop, building up slowly to weekend jogs together. Finally, A asked H out on a date.

H managed to keep the relationship hidden from her parents for 6 years. “I was sure they’d disapprove because he’s Turkish,” she explains. Even though both Tunisians and Turks in Germany are predominantly Muslim, H says it’s not uncommon for the older immigrant generations to be prejudiced against one another. “The Tunisians here think that all Turkish boys are in gangs, are loud and have no respect, and don’t achieve anything,” H claims; “Tunisians in Tunisia think more positively about Turks than Tunisians in Germany do.”

When she told her parents about the relationship in 2013, her mother threatened that H was “ruining her life” and that if she continued, they would disown her. “I haven’t even told them yet that A is Shiite,” H joked (her family is Sunni).

According to H, the problem is her mother’s stubbornness more than anything else. But listening to the stories one can’t help but notice an underlying theme of fear, logical or not. A fear of losing one’s child. A fear of not relating to one’s grandchildren. A fear of the dilution of one’s cultural lineage over generations. “Many in the Tunisian-German community are scared that their kids will marry Turks and end up in Turkey,” H agrees, “my mother is also afraid her grandchildren will never learn Arabic.” H and her sisters speak strictly Tunisian Arabic with their parents. When just amongst each other, a mix of Arabic and German.

Language is just one question of many that H and A will face as parents. They have already decided that A will primarily speak Turkish and H mostly German, which she is more comfortable with than Arabic. They have even talked about where they will really end up one day. H tells me that the Tunisian consulate pays for the bodies of Tunisian nationals in Germany to be sent back for burials. A, who came to Berlin at 18 as a student, gave up his Turkish passport to become German.  As an entrepreneur he’s eager to launch projects in Turkey and maybe even retire there one day, but is limited without citizenship.

After months of not seeing each other, H and I finally find time last November for one of our Sunday coffee dates. H arrives to the Italian cafe in an uncharacteristically bulky sweater that makes me raise my eyebrows. Shortly after ordering our lattes and chocolate cake, she spills the beans: she and A have gotten married, and she’s newly pregnant. The religious ceremony was held at their apartment with an Imam presiding and a handful of their closest friends and siblings present. H’s parents chose not to return early from their vacation in Tunisia to attend. As for their upcoming grandchild, wherever he or she decides to be “really from”, they are still in the dark.

By Sophia Burton from Collidoscope Berlin

reprinted with the permission of Collidoscope Berlin

I’m a human being

Whose Multikulti is it? The elusive definition of multiculturalism

If you put the German word Multikulti* (translated as ‘multicultural’, though it means much more) into Google