I always wanted to go to Germany anyway

My name is Ying, I was born in Taiwan, but raised in Argentina and in the USA. I have been living in Germany for more than 5 years now. I hold a double Bachelor’s Degree in Business Administration and Languages and a Master’s Degree from the University of Göttingen in International Economics. I currently work in consulting in the market research industry.

I went to a German school in Argentina. My parents wanted us to grow up in a multilingual environment.

When we moved to the USA, I had an opportunity at the University to do an exchange program in Germany and thought to take the opportunity for no particular reason. I always wanted to go to Germany anyway. I spent three semesters in Germany, but then went back to finish my studies in the US. I came back to Germany to do my Master’s when time came.

What were the biggest struggles when you moved to Germany?

In the beginning, my German friends always wanted to speak English with me. I had to stop them right away: “If you want to practice English, go to the US.”

Maybe also food… there is a litre of sauce on almost everything; cannot comprehend this.

Punctuality was a bit of a struggle. I have a reputation of always being late for social gatherings – the South American in me. Germans are also very straightforward people. On a professional level I appreciate it sometimes, but in certain cases the lack in diplomacy is staggering. I can deal with it now, not that I like it, but you know what is coming and there is definitely no use to become upset.

What are the positive/negatives sides of living in Germany?

Let’s start with the positives! Living here gives you a sense of security. Everything is to the dot. I also like the sense of order. Most people are socially conscious for the most part; even (ridiculous) things such as crossing the street at night – in winter, with no cars around, but people still wait for the green guy to turn on.

Do you do it yourself?

No, I don’t. I often like walking in the middle of the street any time of the day.

Back to your question, but now about the negatives. I’d say rules are good and it is important to follow them, but often they are too black and white…

All things said, I am satisfied with my life here. 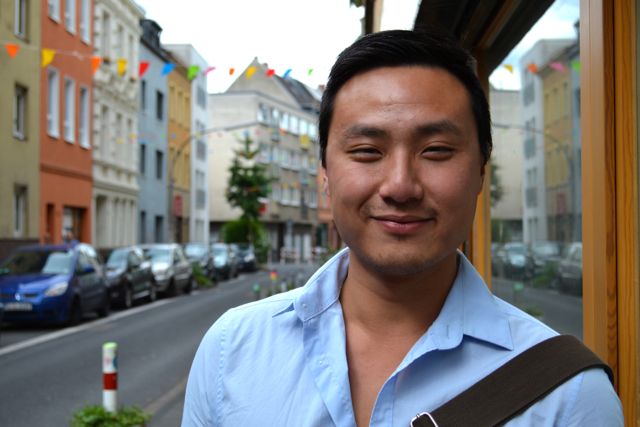 Have you experienced any cases of racism or discrimination in Germany?

I always get looks. I don’t know whether they are good or bad… In Cologne I have not felt that so much though… when I go out at night I am usually the only Asian during the entire night. In Argentina, especially as a kid, racism was rampant. Verbal and physical abuse, etc… But you get used to it. It is mostly ignorance. People often don’t know and they are afraid of something that is different. I grew up in this kind of environment, but ended up being one of them eventually.

How do you identify yourself?

I consider myself Argentinian (I’d say about 80 %) and the rest of the 20 % a mix of American, Asian and European.

Germany has come a long way. During my exchange in 2007 Germany was different… not as many foreigners as we can see now. In 2010 when I came back here there was a massive visible shift…I started getting a feeling of Germany turning into a kind of a melting pot… at least in some ways. There is still a long way to go.

Do u feel integrated?

I do, but most of the time I don’t really care what other people think. I don’t have time to think about such trivial things.