In Argentina I was teaching. I had even taught statistics at the university…. and suddenly I had to fight the vegetables here in a restaurant’s kitchen.

Ariel Milanesio has not exactly made his life easy. The Argentinian sports scientist moved to Germany eight years ago, left behind his successful career in Buenos Aires and, not only resettled in Cologne, but started swimming against the tide once again.

As a teenager Ariel had to accompany his sister to gymnastics trainings, more precisely rhythmic gymnastics (RG), which is a female-only sports. He found it so intriguing that he started to try out the tricks with different apparatuses – ball, clubs, ribbon, hoop – and he happened to be really good at it. Soon after he began helping out the local coach in teaching the girls gymnastics.

Slowly gymnastics turned into his life: Ariel went to study sports science and finally started to coach his own rhythmic gymnastics team. This was something highly unconventional at that time: he was the only male RG coach in Argentina, maybe even in the whole South-America. At the same time Ariel began working as a lecturer at the university.

However, the successful career was not enough for the young man: he dreamt of visiting Europe. In 2004 his dream fulfilled and he travelled to see the Olympic Games in Athens and afterwards visited Spain. “I had a different idea of Europe. It was not all that different from home. Spain suited already a bit more to my idea of what Europe was, this ostentatious Europe – nice buildings, castles, cathedrals, churches. It was beautiful,” Ariel recalls.

One would have guessed this was enough for an adventure, but after that trip Ariel decided he wanted to live in Europe for a while. “I did not want to simply give up everything and just fly somewhere. Therefore, I started to look for university partnerships. It happened to be that I found this partnership with the German Sport University Cologne,” he explains. “When I arrived, I could not even understand “Guten Tag!”. Absolutely nothing. I thought: “What on earth are they speaking over here?”.”

The back then 28-year-old man landed in Cologne and had to share students dorm with much younger Erasmus students from all over Europe. “I like to say that in this 17-hour flight I turned into an illiterate: from a university graduate into nothing,” he says.

Only few months in Cologne were enough to pursue a new dream: the Argentinian wanted to stay longer. Hence, he started to learn German more seriously. “In the beginning I went to a bookstore, straight to the children’s section, and read some kindergarten books. It was a bit funny,” Ariel describes. “When I left the apartment, then I could forget my umbrella or coat, but not my dictionary. I never left home without it.” 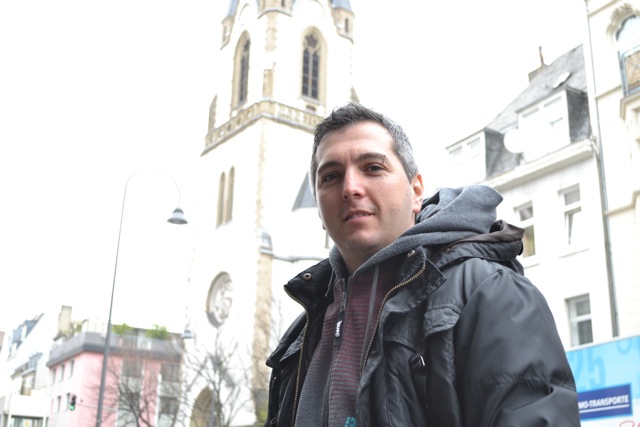 Soon after, Ariel tried to get a job in Germany as a rhythmic gymnastics coach. It was something he had done successfully for years. Nevertheless, the local gymnastics professionals were skeptical: a man had never taught RG in Germany before.

For that reason he started working in a circus school. Since that was not enough to survive, he had to work on the side in a restaurant’s kitchen. “I was treated so badly there. It was unbelievable,” he recalls. “In Argentina I was teaching. I had even taught statistics at the university…. and suddenly I had to fight the vegetables here in a kitchen.”

Maybe that would have been the right time to give up. But he did not, he rarely does. “I am proud. If somebody tells me you cannot make it, and I know that I can, then I carry it through. I simply had to prove that I can make it,” he says. However, it did last altogether seven years, before he could say: “I did it”.

“It was hard. I sometimes wonder if I would go through it again when I only knew how difficult it was going to be. Probably not,” he admits. “Only last year I finally got this feeling that I can enjoy a bit, rest a bit and avoid the feeling that I have to prove something every day.”

Finally, a small gymnastics club in Bonn gave Ariel a chance: he taught the girls there twice a week until the local gymnastics coaches started to notice his skills. He now works as a sports scientist in the circus school, teaches fellow coaches acrobatics and aerobatics methods and also coaches some of the best German rhythmic gymnasts in Leverkusen.

Besides that, he has made rhythmic gymnastics history: Ariel was the first male RG judge to acquire international brevet of second level in 2013 (The highest level is the first. An international judge can first apply for level four – ed.). Already the same year he was selected to judge in the RG World Championships. “I did choose to do something that no-one had done before. It lasted very long before I succeeded, but my strength is to be diligent and consistent,” he says.

Having built up his career in Germany from scratch, he now intends to stay. “I am feeling good here. I have integrated myself. I try to contribute to the society and I get good feedback,” he admits and notes that he is applying for dual citizenship. “It is not about the feeling. When I work and live here, I want to benefit from it. I am paying the taxes and have many obligations, but without citizenship I don’t have the same rights as Germans. I don’t like it. I also want to elect and have the security.”

Ariel knows he will probably never manage to blend in. There are always people who notice that you are not German. He doesn’t mind the fact, but finds it nevertheless amusing how foreigners are treated. “I started a yoga class and they told me that in case I don’t understand something I ought to tell them. I told them you can talk as usual to me, not slower and not louder,” he says. “Well, I’m not deaf, nor an idiot. I know my pronunciation is not perfect, but these things keep happening.”

His German is close to perfect. Maybe only the Spanish “r” gives it away. However, grammar mistakes are seldom. For this he also has to thank the children he teaches. He describes laughingly:

In the circus school the four-five-year-olds do not allow you to make mistakes! When you say die Trapez (trapeze – ed.) they will tell you right away DAS Trapez. Exactly with this strong emphasis. You will never forget that in your life.”

There are two other phrases he will remember for the rest of his life. These tended to some embarrassing and hilarious moments: “Einbahnstraße” (one way street – ed.) and “schlafen mit jemandem” (to sleep with somebody – ed.).

“One Sunday I went out alone and took a bus. I stepped out of the bus and read “Einbahnstraße”. I had a map and started looking for this street “Einbahnstraße” to figure out where I was. I was a bit confused because I thought I saw this Einbahnstraße already somewhere,” Ariel explains holding back the laughter. “Then I was trying to follow this Einbahnstraße. I thought it has to be some important street, because it was very long. Of course, I never found the address I was looking for. When I got back home I explained this to my friends and only then I found out what the Einbahnstraße really meant.”

The other time he stayed overnight at a friend’s place. Next day he explained this to others: “Ich bin mit ihm geschlafen.” Which means: “I slept with him”. Ariel’s friends were utterly shocked: “What?!?”

“Then I added: “Yes, and then she and he as well and this other person… we all slept with him,” Ariel recalls. “Finally they asked me if I meant sleeping at the friends’ place, not sleeping with the friend. I really had no clue what they were talking about. Finally I got it and I will never forget that. It was very embarrassing.”

2 thoughts on “Fighting the vegetables”