Entrepreneur whose measure of profit is not money

If you do something that comes from the heart, you’ll not feel like you are working. I involve my children in my work. That way, they learn what I do and we spend quality time together.

Entrepreneur whose measure of profit is not money

Not many people would freely admit to have been nicknamed after a pig when they were growing up. But then, Veye Tatah (41) is not like many people. She is a straight talking, confident and successful entrepreneur who has established two business enterprises and a non-for-profit organisation from the ground up. And the pig in question is no ordinary pig, it is Snowball.

Snowball is one of the characters in George Orwell’s epic novel Animal Farm. He is intelligent, passionate, idealistic and endowed with oratory skills that help him win the adulation and following of other animals on the farm. These attributes are what made Tatah’s four siblings give her the nickname. “Even as a child, I was very smart. I came up with all sorts of ideas, which my brothers and sisters implemented, so they started calling me Snowball,” she says.

Getting paid to talk

Indeed, it is one such idea that propelled her firmly onto the entrepreneurial path. In 2003, while working at Dortmund University, one of the professors asked if she could prepare African food for a graduation party. “Some people liked the food and wondered if they could get it at an African restaurant. Realising that there was no such restaurant, I saw a business opportunity and grabbed it,” she says laughingly.

She set up the Kilimanjaro catering and events service that year. The company caters to both personal and corporate parties and events. In the busy summer season she has up to seven events per month. “It is a seasonal business, so I cut operational costs by using my own pool of fifteen people that I can call when I get a contract. If the event is large, I outsource additional labour from established companies,” Tatah explains her business strategy.

The entrepreneur explains that her regular income comes from her consulting firm, which she set up in 2007. “While I was employed at the Information Technology Department of the Technical University Dortmund, I was often invited to train and give talks by different organisations. I realised I could make it a full time job,” Tatah narrates. She quit her university job to set up a consulting firm that offers IT services, project management and intercultural training. Like Snowball, whose rhetorical skills were unmatched on Animal Farm, the entrepreneur admits that her speaking engagements are the most lucrative part of her consulting work.

Growing up in Cameroon in the eighties, Tatah had a typical African middle class life, and attended a good catholic boarding school. It may not be the environment that breeds revolutionary minds, but she always knew she was different. “If something bothered me, I had to do something about it, or else I would have internal unrest.”

When Tatah came to study in Germany in 1991, she was disturbed by the negative image of Africa in the media. In 1998, she started Africa Positive – a  German language magazine that provides alternative and balanced news about her home continent.

Africa Positive is to Tatah what the windmill project was to Snowball – A difficult job, but one whose benefits far outweigh the challenges. Her close confidant, and deputy chairman of the advisory board Hans Decker says, “She’s passionate about this magazine. She calls it her third child and I agree. I don’t think Africa Positive would function if she was not there. She is the driving force behind it.” 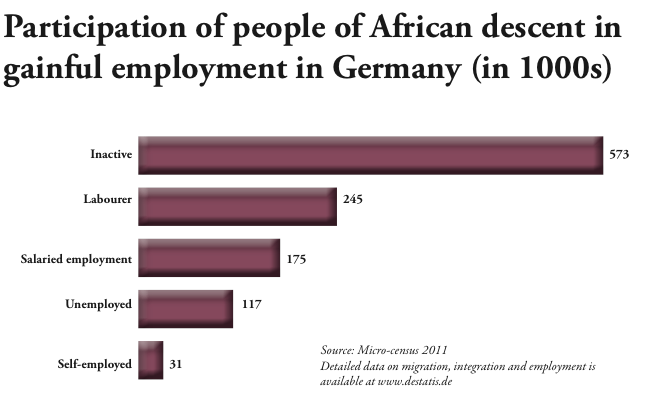 Today, Africa Positive publishes between 5,000 to 12,000 copies of each quarterly edition, depending on the orders. The magazine boasts of subscribers in Luxembourg, Belgium, Spain and Holland. What started out as a magazine is now a fully fledged non-profit organisation called Africa Positive e.V. which is engaged in education and integration projects in and around Dortmund.

Tatah shakes her head wondrously as she explains that the magazine was her foundation for success. “I worked twenty hours a week, attended lectures, ran a magazine and raised two sons. I think those early lessons, discipline and sacrifice are what prepared me to run my business.”

She is still doing it today. Her small, bustling office not far from the main train station of Dortmund is a hive of activity. She joins her team to answer phone calls and plan an upcoming event, while somehow supervising her youngest son Doh (12) who is eating lunch and doing his homework in the conference room. Her older son, Verki (16) does not hang around his mother much, but twice a week, he helps out in one of the education projects being implemented by Africa Positive e.V.

For Tatah, the line between work and family is almost nonexistent. She is happy that her partner understands and shares her work ethic and values.

If you do something that comes from the heart, you’ll not feel like you are working. I involve my children in my work. That way, they learn what I do and we spend quality time together.

Tatah may be a successful businesswoman, but it is obvious that her greatest source of pride is the work that Africa Positive e.V. is doing. Decker seems to have some concerns about this. “Money is not important; she just wants to do a good job. I hope that in five years, she can still do what she loves to do and earn a good living from it,” he says.

Tatah is not worried. She categorically states that her measure of success is not financial achievement. “We are reaching out to people and changing minds. You cannot buy that with money.”

In Orwell’s novel, Snowball finds out the hard way that reform has formidable enemies when he is chased from the Animal Farm. For Tatah, there seem to be no worries on this score. Although she does not talk about it, she has received nothing but high accolades for her work. Hopefully, it will stay that way.

One thought on “Entrepreneur whose measure of profit is not money”