My name is Alessandro Ottaviani, I am Italian from a small town called Potenza Picena in the center of Italy. I studied Mechanical Engineering in Ancona and took Master’s Degree in 2008. In 2009 I moved to Florence to work for General Electric – a big plant with more than 4000 employees. For 3 years I was a supervisor in the shop-floor coordinating a team of operators. Then in 2012 I passed a selection for a program called “Operations Management Leadership Program” that gave me a chance to change 4 roles in 2 years (once every 6 months) and to do 5 one-week courses around Europe and one in the USA. With this program I have had the chance to live one year in Germany!

When I first moved to Germany in July 2013 it was a shock simply because I have never studied German in my life!  I soon realised that Cologne was a really good place to live and at work I was assigned very important projects. Integration process was basically joining events organised by Facebook groups or by the site “Internations” and it was really cool to meet people coming from all parts of the world.

What I like the most about Germany is the organization, you can really live with a bicycle and public transports without the need of a car! I also like the number of events organised here and how many parks for picnic or running there are. There were definitely things I had to adapt to, for example, not having aperitivo, have dinner at 6:30 pm, the kind of food and also the fact that in Italy, when we meet outside girls who are your friends, we usually give two kisses on the cheek and in Germany it is absolutely not common. But I think going abroad you will always find something different and you should be flexible to adapt to new ways and traditions.

What I like the most about the city of Cologne are the people! I met a lot of nice people there and 99% of them like to live in Cologne. I met also many Germans and I liked them, they were really nice and open-minded. In my country people from the North of Europe are considered to be not so welcoming as people who come from the South of Europe, but my experience was really good! 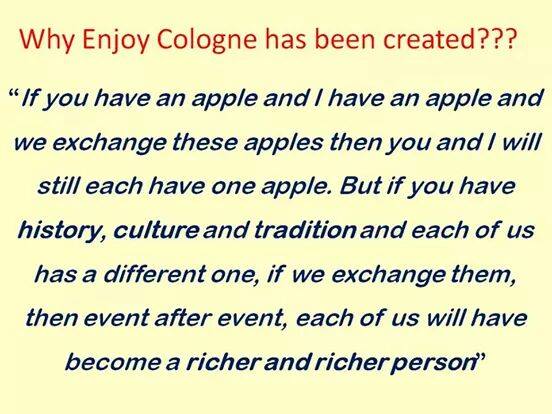 every weekend and ask friends and family to visit them often. All of it is good, but I think if you really want to grow, the priority should be to integrate as much as possible. That’s why, together with visiting other cities and going out with colleagues and Italians, I started to meet people in international events. After a while, I got to know something about 40-50 people and I organised six Facebook events at Christmas markets. There, seeing how many people joined and their enthusiasm, together with 3 friends we decided to create a new Facebook group called “Enjoy Cologne” that started in January 2014!

Attending other group events, I realised two things: organizing always the same kind of events you capture only the attention of some people and at the end it gets boring. Secondly, sometimes when you are new you don’t feel comfortable because older members always speak to each other. So we decided to create many kind of events and to focus on the new members. The group grew very fast and every time new members came. We started with events like bowling, cinema, running and for spring we started also bicycle trips and barbecue where also 80-100 people came! I was impressed about how many new people joined the group, at the end of June there were more than 2000 members and for my goodbye party more than 120 people came! But apart from the quantity, it was mainly about the quality, mostly people are here for studying, doing PhD or working. I am still friends and in contact with many of them.

It was great to have the feeling to have done something very good for the society, many people told me that thanks to the Enjoy Cologne group they improved their life! I also think that it was useful for Germany because people like to live there more and finally I have done a really good job for my country :-), everyone in the group knows that it was an Italian guy who had this idea, so they can have a better opinion of my country. The most important reward, however, was the idea to have left something in Cologne, something that now is still going on and doing a great job for the society thanks to my closest friends who are now the administrators of the group. For me Cologne was a great place to live and I will always remember the time spent there as a really good time…. And maybe I will be back one day!

Check out the video below about the gift my friends made for me for my farewell party!!!