Jazzing in a free world

Being a foreigner is never easy. You can be a genius but the chances that you remain unnoticed in Germany are high. You know, it does not disturb me anymore. I have learnt, after 10 years in Austria and 15 years in Germany, to accept and to adjust. However, I often feel here like a monkey, a monkey from Romania.

Jazzing in a free world

On a Sunday in November I meet an accomplished Romanian jazzman and a composer Nicolas Simion for breakfast. I stick to my usual Italian cappuccino and he chooses a big “London” breakfast. We are settled in to talk for a few hours in a nice Turkish place close to Clodwigplatz in Cologne. I must admit I know as little about jazz as I now about classical music. My career as a musician stopped in the second grade when I was obliged, back then still in the USSR, to learn how to play an accordion, which was two times bigger and heavier than me.

How the musician was made

Nicolas Simion was born in Dumbravita, a small town in the Carpathian mountain chain in Transylvania. He attended a musical school and studied classical music at the Conservatory in Bucharest. His first impact with jazz music happened when he was only 12 years old. A friend of his introduced to Nicolas a few famous songs by Louis Armstrong and he remained very puzzled and disappointed. “This music is definitely not for me,” thought the young Nicolas back then. He only changed his mind seven years later. He was in a military service at the age of 18, where he met a very talented amateur gypsy musician Lon Fieraru, who could play clarinet, saxophone and a guitar. “He did not know the keys at all, he would just turn on the radio and start improvising together with the radio.” That was it – the turning point for Nicolas. “If he can do it, maybe I can do it do, just like a monkey,” laughingly says the jazzman. At the age of 19 he bought his first saxophone and started to compose jazz music applying his knowledge of the classical music.

A long way to the free world

In 1983 after finishing the Conservatory, Nicolas was a freelance musician performing in bars, pubs and at weddings, and in the meantime practicing jazz and developing love for improvised music. He realized that he could not stay in Romania to achieve his dream to become a professional jazzman. Life as a musician in back then torn Romanian State was very difficult. “In the West you could still have a life as a musician, but to live life as a jazzman in the totalitarian Romania was impossible,” recollects the musician.

In 1988 he managed to obtain a travel visa for Poland to participate in Warsaw Jazz Festival. He eventually missed it because the Romanian customs officers made his time difficult at the airport: Nicolas had three musical instruments with him without permission. “They just did not want me to leave,” says the jazzman.  He still remembers the feeling he had being on a plane to Poland. “I am going to the free world, I will do my best not to come back,” thought Nicolas. Soon after the missed concert and with an expired tourist visa, he took a night train to go to Vienna but he ended up living in a refugee camp in Hungary for several weeks. Since he could not speak Hungarian, Nicolas was not allowed to teach music: “They said they would give me an easy-for-my-soft-hands job and I found myself working in a factory. It was like living in a Soviet gulag, waking up at 5 a.m., putting on a grey overall and going to work.”

After six weeks he took another night train to Vienna with the same idea to emigrate to the West and to lead life of a musician. “I was so lucky because the customs officers in Austria did not even open my passport and did not see the two red crosses on my expired tourist visa to Poland.” Nicolas remembers that he had the very same feeling again: “now I am really emigrating to the west and doing my best not to come back”. In Vienna he stayed for some weeks in a refugee camp again and “it felt like I was put to a jail with 30 people from all parts of the world in one room sleeping on awful metallic beds and wearing stripped pajamas,” recalls the musician. In several months a long trip to the free world that lasted ten weeks was over, he received the political asylum, always remaining faithful to his music. 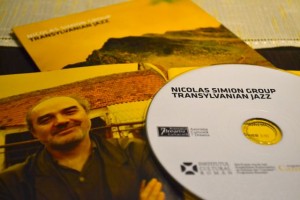 The beginning as a musician in the free world was also hard but, as Nicolas looks back: “I was strong enough to resist and I met people along my way who supported and believed in me.”

The found freedom to be a musician

Now Nicolas Simion, in his 50ies, but with a charisma and enthusiasm of a young man, keeps on smiling, throwing jokes around about his life, but remaining always rather serious about the music. As a true romantic, he confirms that the best moment about being a musician is “when you don’t have any money, but you play your saxophone and it does not bother you anymore what is going to happen tomorrow.”

Nicholas does not like to make plans for the future. “I am an old-fashioned guy, maybe I will go back to my small home village in Romania to plant potatoes and tomatoes,” he says laughing. For now he continues to tour the world with his amazing music. His music creation on over 30 CDs are a proof of over 30 years of hard work and dedication. “I am like a small bear that keeps on moving; the dogs from time to time bark from different sides, but I keep on walking,” describes himself Nicolas.

When we are about to leave the Turkish place, Nicolas draws from his jacket one of his most acclaimed CDs and gives it to me as a present. We walk together a little bit and then I rush home to listen to his authentic “Transylvanian Jazz” that represents the musical roots of his home country. After this magnificent 60 minute jazz experience I can proudly say that I know a little bit more about the jazz world and a jazzman that found his path in the landscape of contemporary jazz. A jazzman who made his dream to become a professional musician, in spite of all the difficulties, come true.

Previous Post
Dreaming to get back
Next Post
A world citizen with roots in Turkey, UK and Germany