You have lived in Germany most of your life. Do you feel more German or American?

I am definitely American. Certain characteristics such as the American sense of humor will never be lost to me nor a certain easy look on life, which seems typical to many of my US compatriots.

An American living the medieval fairytale

It is a grey and rainy October day when we set out for Mechernich to meet a countess. A countess who truly lives in a castle. Growing up with all the fairy-tales with princesses and the magic that surrounds the aristocrats, my fantasy has now no limits and I am excited to see how the myth fits the modern day reality.

We drive up to the castle Satzvey, known better as Burg Satzvey, and everything still fits perfectly the fairytale-like medieval fantasyland. Any second a princess could come out from the castle. Instead a man appears to the courtyard – tending to our reality check with jeans and winter jacket.

The magic returns once we enter. Finally we meet the countess – Jeannette Gräfin Beissel von Gymnich welcomes us literally to her castle. The proverb “your home is your castle” acquires a totally new meaning in this setting and brings back the medieval charm.

Gräfin Beissel is an American with the most interesting background you can imagine: she is born in Bonn, because her father was a U.S. diplomat, she has lived and studied in four different countries and, last but not least, has become a countess along the way.

A dreamer or not?

Her eyes light up when she tells us the story of how her husband, Franz Josef Graf Beissel von Gymnich, won her heart.

“In 1983 I accepted an invitation by my future husband to a fantastic medieval weekend at his family castle and was enchanted by the fairytale ambience I encountered here. Renaissance banners were hanging from the turrets, Venetian gondolas harboring opera singers floated on the moat with over thousand guests in evening attire attentively listening,” describes Gräfin Beissel. She admits that she was skeptical at first: the count had told how great the event was going to be, but the circle of friends thought that the then young antique dealer was a dreamer. This night changed her life forever. 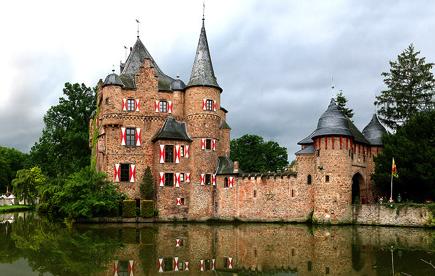 “The next day I awoke early to an unrecognizable sound. Leaping to my guestroom window, I saw to my amazement the lord of the castle himself dressed in jeans driving a tractor and pulling a trailer, onto which he proceeded to empty the garbage amassed at last night’s party,” she continues. “I was impressed seeing him doing this heavy labor alone. I then realized that this indeed was no dream.”

The couple got engaged few months later and married in 1984. Next years they spent building up the first and one of the most popular medieval jousting festivals in Germany. Soon it grew out into a full event calendar from Easter until Christmas, keeping the family busy with attractive events on most weekends.

During the years the countess has tried out every work in the castle similarly to her husband. “Selling tickets at the front box office, serving our guests, washing dishes, writing press releases, inviting VIPs and taking personal care of them and much more,” she brings examples. “Late hours and no free weekends for years and years were a matter of course, and still are. We are lucky in having found an excellent successor in our daughter, who founded her own event Agency, Patricia Gräfin Beissel GmbH in 2011 and now runs the event business at our castle, as well as organizing historic festivals elsewhere.”

Despite the fact that Jeannette Gräfin Beissel has lived in Germany over 40 years, she still feels American. “Certain characteristics such as the American sense of humor will never be lost to me nor a certain easy look on life, which seems typical to many of my US compatriots,” she explains. 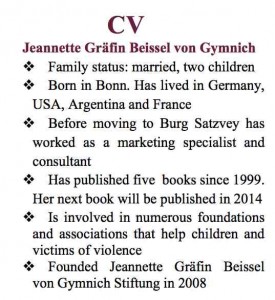 Nevertheless the countess stresses how important it is for foreigners to learn the local language and culture: “People who come to live here in Germany and become German citizens have not only the right, but also responsibility as citizens to learn the language so they can communicate.”

According to Gräfin Beissel, one of the biggest obstacles in German integration is the widely discussed problem with communities where people don’t speak German. “I  believe it is important to remember your own culture, but when you come to a foreign country you must try and understand the traditions you find and accept the culture in your new homeland,” says the countess. “Of course this does not mean giving up your own beliefs and own religion, your own traditions and your own way of dealing with life, but still you must respect your hosts’ ways of thinking.”

“It’s going to take a while for this whole integration process to really melt together in Germany, I feel that many here still have problems accepting a global melting pot idea,” she continues. “I have encountered some quite amazing personal stories,” she adds. “Such as when I met with women entrepreneurs whose families immigrated here just one generation ago and whose parents were in some cases illiterate. These women learned the language, gained high level degrees and are now successful in their various careers.” They have become German citizens without forgetting their roots and in becoming members of the German society do their part in contributing towards the gross national product. In some cases more so than their fellow-citizens.

It’s going to take a while for this whole integration process to really melt together in Germany, I feel that many here still have problems accepting a global melting pot idea.

Being a part of the community is the key, says Gräfin Beissel. She has founded the Jeannette Gräfin Beissel von Gymnich Stiftung, to help children in Germany who have difficult and traumatic family backgrounds. “I’m an American. Why should I take so much time to help German children? Because I live here with open eyes and see where help is needed. I am doing this because I am part of the community, it is my responsibility,” she adds.

Life in this German castle, as well as her many honorary activities and writing books, keep the countess as busy as when she first moved in 30 years ago. Burg Satzvey still shows its magical side when we end our conversation, however, the charming countess has showed us also the modern-day reality of creating this enchantment. It is her fairy-tale world that has come to be through many years of hard work.