Ali for (and from) Germany

In the wake of Germany’s World Cup victory, much has been said about a renewed sense of German patriotism and its implications. While some have feared a connection to Germany’s dark past, others have welcomed the discourse as a chance to shape a new sense of belonging within the country’s evolving demographics. We’ve already written something about it here. But what a discussion on national identity means on the personal level is another story. Or rather many stories. Here’s one.

Ali for (and from) Germany

It took Ali Riza Gürbüz over 30 years to feel welcome in Germany. Originally from East Anatolia, Ali moved to Berlin at age 12 with his brother and sister. His mother had arrived 8 years prior in 1973 as part of the last wave of guest worker recruitment. She was living in Neukölln and working for a cleaning company. His father stayed behind in Turkey.

The beginning wasn’t easy, Ali recounts. Understanding German society, learning the language, feeling at home… this all took time. But eventually he gained his footing, finished his schooling, completed an Ausbildung (apprenticeship), and in 1986, began a career in industrial mechanics. Today, he’s married, has a 12-year-old daughter and an active social life, and makes music in his free time. He still lives in Neukölln. 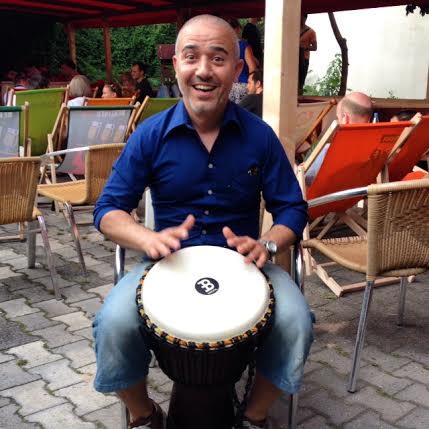 But despite spending the majority of his life in Germany, having German citizenship, and making a home here, he’s often felt like an outsider.

I still don’t really have any German friends, Ali tells me on the last night of Ramadan in July, after breaking the fast together. We’re sitting outside on Kreuzberg’s iconic Oranienstraße with his friends, also both named Ali, both German-Turks* born in Berlin. Ali and Ali nod their heads in agreement. A rollerblading demonstration passes by in front of us. I don’t understand it, Ali says. We all have the same sources of stress – work, money, family – so why don’t we make more of an effort to be nice to one another?

Ali can cite the definitive moment in which he felt that he had finally “arrived” in Germany. I was in the Bundeswehrkrankenhaus [German Armed Forces hospital] last December for a week due to a skin issue. I received such kind and affectionate treatment from the nurses and doctors. The same treatment as everyone else. I shared a room with a guy named Wolfgang, and we talked for two days straight, about everything. The atmosphere made me feel really welcome and inspired.

So inspired, that he started writing a song on his phone while still on his hospital bed. Two days after he was released, he finished “Ali für Deutschland” (literally “Ali for Germany”), a World Cup song in support of the German national team. After recording it, Ali ran around to different departments and bureaus in the city, asking for support. Eventually he got a production company to film it for free. The song is available for purchase online (99 cents on iTunes) and half of the proceeds go to a homeless shelter in his neighborhood. I really believed in the song and project, Ali explains, I wanted to show that someone who has my name and looks like me supports the German team. That people from all over the world with different backgrounds live here and consider it their home.

Singing alongside Ali in the music video is his daughter. I see that she’s growing up differently than I did, that she’s happier. I hope this song contributes to that. For Ali, it all comes back to the media. When Mesut Özil [German-Turkish football player] makes a good play, German-Turkish kids get patted on the back. If he does poorly, people shake their heads at us. The migration background is always emphasized.

Ali’s point is backed by research. A recent Stern poll shows that over half of Germans believe that Islam does not belong in German society. Experts argue that Islam is often conflated with Turks, the headscarf, and migration due to images perpetuated in the media. Another common image: German-Turkish or Arab youth as more violent or prone to criminal acts than their “native” counterparts, a stereotype repeatedly rebuked by studies. There are so many positive examples of what German-Turks have done and do for this country, Ali says, but news and social media continuously choose to show negative images. I want the media to show more positive images.

Ali is a positive person by nature. His face lights up when he shares stories of making connections to people at work or through his music. But he also has plenty of examples of feeling unwelcome or misunderstood on account of his background. He makes a conscious effort to speak Turkish with his daughter only at home and German out in public, in order to avoid judgment. More than once he’s been told “Du bist mein Lieblingstürke” (“You’re my favorite Turk”), by a coworker or a club bouncer, for not stirring up trouble. What am I supposed to do with that? Ali asks, his eyes filling with emotion. Recently, a colleague joked to Ali that the reason his work contract was not renewed was because of his new hairstyle. You look like a Turk now, he told Ali. 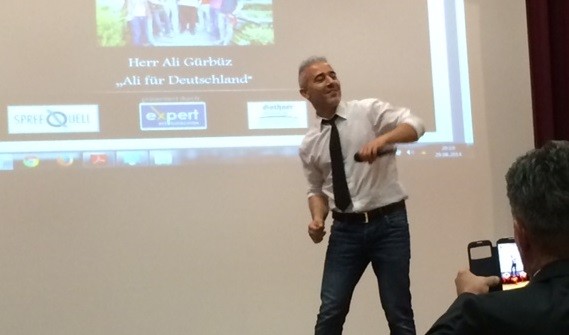 After 6 years at the company, successfully training incoming employees, Ali had expected to keep his job. After the video, they told me my music was making me slower at work, which wasn’t true, Ali says, shaking his head. I always felt like they were waiting for me to explode, to show my “Turkish temper”. In the end I think they just couldn’t deal with my humanness.

Ali is disappointed but not disheartened. He is taking this unexpected turn as a chance to reconsider career paths. I have so much experience, and I want to use that to do something good, he says. He’s now thinking seriously about becoming a social worker for kids with migration backgrounds. I know what they’re going through. I can go into their homes and talk to their parents, help them see what options they have and make sure they don’t give up. More than likely, he’ll do it with music. I learned early on that music allows you to reach a lot of people. Music is its own language, one that you don’t need to understand, just feel.

Ali is certainly “for” Germany, but does he consider himself from Germany? Whew, Ali lets out a deep breath, I’m not sure. I have parts of German culture and parts of Turkish culture. But I think, most of all, I’m a Berliner.

The term German-Turk is a hyphenation often used for people born and/or raised in Germany with 2nd or 3rd generation Turkish backgrounds. For more on language, migration, and identity, see our article here.

For German interviews with Ali, click here and here.

All of Ali’s quotes have been translated/paraphrased by Sophia Burton.

The original article can be found here.