The most horrible words are, for me, the separable verbs – brutal and inhuman! Here you see that the Germans are much more disciplined, because in German you have to wait until the end of the sentence to understand what the talk is about. Maybe because of that they interrupt each other less. We, French, are more the interrupters.

Most of what is written now will probably be lost in translation and lost also because it is written. No matter how hard you try, it is impossible to describe her accurately enough: she is Nathalie Licard, a French woman who has been living in Germany already for 20 years. She is also a well-known TV entertainer – famous for her lovely voice, vibrant performances and, believe it or not, because of her particularly strong French accent.

Yes, you read it correctly – she is a celebrity because of her charming accent and the adorably chaotic way she speaks German. Therefore, every time you read her quotes in this article, you have to imagine a strong French accent with it!

One of her favorite phrases is: “Ich bin wie ein gekochtes Gemüse”, which would literally mean “I am like a boiled vegetable”, only that no-one in Germany had ever heard of this idiom before she came up with it. And there is a whole list of the phrases she has come up with during her two decades in Cologne.

When Nathalie tells a joke, she adds: “Die hatten humor” (which sounds more like: de atten umor – ed.) meaning “They had humor” to describe that the people around her were laughing, because in French it actually sounds good: “Ils ont de l’humour.”

Last week Nathalie’s kitchens water tap was broken, so she tells: “Man sollte mich reparieren”, which means strictly speaking that somebody ought to repair her. What she actually meant, was, of course, pretty clear right away, but by that time I also “had very much humor”.

Exactly because of such unintentional jokes, she has become quite famous. She says it happened coincidentally. “There are many people who think that I talk like that on purpose. That is not true. They simply need to understand that I learned German only in my thirties,” Nathalie says. “If I listen to my recordings, then I cannot even believe how strong my accent is. My inner ear cannot hear that while I am speaking.”

Nathalie would like to get rid of the grammar mistakes she makes in German. “Now I am trying to do that – unfortunately 20 years too late, to be honest,” she says laughing, explaining that three months ago she begun a language exchange tandem. “My problem was that I was not corrected when I started learning. Now I meet with a German and we speak half an hour in French and half an hour in German. That is the best thing ever!”

A bit later Nathalie explains her frustration with German grammar: “The structure of the German language is in my opinion totally absurd. And then the articles: I do not give a damn of what gender is a table or a chair. But if you don’t know the articles, then it’s impossible to decline the noun correctly. That is why I simply do not decline the nouns! If I do not know the article, why on earth should I even start declining it then?” Sounds familiar, doesn’t it?

She gets even more emotional when she starts talking about separable verbs: “That is brutal and inhuman! Here you see that the Germans are much more disciplined, because in German you have to wait until the end of the sentence to understand what the talk is about. Maybe because of that they interrupt each other less. We French are more the interrupters.” 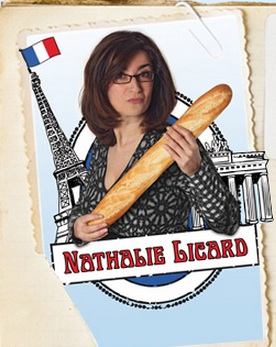 How did it happen then that this very French lady ended up in Germany? Nathalie explains once more: it was all a coincidence. ”I met a German and I simply came to visit him in Cologne and then I stayed. In the beginning I did not work and I could not speak German at all – it was disastrous!” she starts explaining. “I really did feel myself like “gekochtes Gemüse” (the famous boiled vegetable once again – ed.). Through my acquaintances I had a possibility to start working in a production company as a student assistant, pretty much as a maid-of-all-work.”

The company happened to be the same that started producing Die Harald Schmidt Show soon after, a German late night talk show hosted by the comedian Harald Schmidt.

“This student job included moving chairs and tables. I told them: “I can also move the chairs and tables, I do not have to be a student for that”,” Nathalie explains. “I was lucky, because Harald Schmidt talked a bit of French.”

When her contract ended, the producers decided to put her in the call center – even though she did not speak any German. “It was only there that I learned to speak German. In the beginning I couldn’t understand a word! At some point I finally understood the word “Ticket” and learnt by heart the sentence: “Für die Tickets müssen Sie Ticket-Hotline anrufen”,” Nathalie describes and adds laughingly: “That did not go very fast though. It actually went especially slow. The problem with me learning German was that I could not take many language courses, because they were too expensive.”

Nathalie’s TV-success followed also accidentally. “It was actually an idea of Harald Schmidt, because he is a Francophile and our conversations amused him,” she tells in a very serious manner. “Since his show is a comedy, then they thought: “O.K., she is not speaking so well German nor English” and then they sent me to interview famous people in English and exactly because I could not speak the language.”

So it happened that Die Harald Schmidt Show started sending the Madame Nathalie to report from everywhere, including from Festival de Cannes, Berlinale and even from the USA. She has asked Woody Allen, George Clooney, Nicolas Cage, Will Smith and “you know the Austrian with bigmuscle” Arnold Schwarzenegger the questions in her broken English.

These interviews are very funny, but so is the way Nathalie talks about her experience. “I was lucky. I prepared some English sentences, but I did not understand Will Smith’s answers at all,” she begins. “So I asked what he thinks the ladies find most attractive about him. He said his ears. My English was fortunately enough to reply: “Yes, you are right, they are telling “welcome”.” 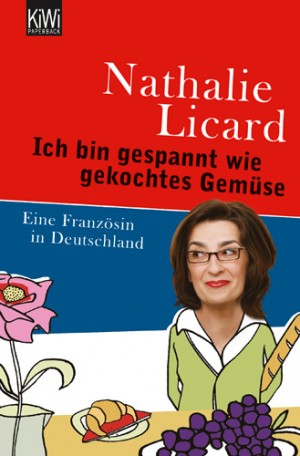 About these stories and her other German-French observations Nathalie has written a book in German. Yes, you read it correctly – in German! “It was not my idea,” Nathalie begins in her humble manner. “The publisher asked me if I would like to write a book. I thought they were completely out of their minds! At that time I was out of Harald Schmidt Show and did not really know what to do. Then I thought: O.K., why not?”

She says she could not have done it without her co-writer, but to her surprise many of her mistakes were left untouched in the book. “It was an unbelievable mental experience. It lasted nine months and on the first day I wrote four sentences, I think,” Nathalie recalls. “It was the hell! It really was.” But it was worthwhile: the book was sold out, all 15 000 copies of it. “I was very proud,” she admits. Despite that she is not willing to repeat this nine months of hell and the part two is definitely not on her agenda.

Life in Cologne is in Nathalies opinion great and she wants to stay here as long as possible. “When I would have to return to France now, I would not even know what I could do there. I am not known there, nobody is waiting for me there. I would have to do a normal job,” she explains.

The only thing she does not like in Germany are the “miserable” supermarkets. “I miss my French supermarkets: we have so much better selection in every range of products,” she says.

Nathalie likes the mentality of Germans – she likes that they are so direct. “I find this direct way to communicate very pleasant and funny,” she admits. “There are not many things that I do not like over here. Cologne is great! This is of course only my experience. I am sure I wouldn’t have enjoyed living somewhere in a small village. Cologne is very cosmopolitan and open, so are the people I have met here.”

Moreover, Nathalie finds the TV people in Germany down-to-earth, unlike the stars in France. “The TV people in France are definitely more arrogant than over here,” she adds. The same goes with how open the German society really is: “I find that the German society has maybe even a bigger acceptance of multiculturalism than the French society. I find that people mix well in Germany.”

Being a French immigrant

In her opinion the problems with integration start with lack of education and social welfare problems. Once you have a job and know the language, there are no real integration problems, at least in bigger cities, like Cologne.

“For me it was only the problem of the language. Other than that I was welcomed very pleasantly by the Germans. The people were always excited to find out I am French,” Nathalie describes. “I am sure that it isn’t the case for many other nationalities, but in my case it was really positive.”

However, she is well aware of the negative examples: “One of my friends from Tunisia speaks perfect French. She told me once that people thought she is French. Then the Germans were very positive and glowing. And the moment she told them that she is from Tunisia, the moment the faces changed. Of course, she took it as an insult.”

If Nathalie is asked whether she would like to become German citizen, since she has lived here so long, she starts laughing. “Honestly, if the next day I would say I am German, nobody would believe me anyway!” she says, referring to her original chaotic way of speaking the language.

But exactly this German that she speaks has become her trademark over the years. The accent and the mistakes are what make it so great: she is a proof for that you do not have to speak perfect German to be accepted in German society. Our imperfections make us unique.