A Taste of Sicilian Food and Culture in Bonn: An Evening of Music, Readings and Home-made pizza

Sicilian cuisine was the showcase of Sunday’s (September 21, 2014) intercultural event held at the community center in Brüser Berg, Bonn. Rosella Vicenzino Timis read from the family’s book of recipes, stories and Sicilian cultural highlights, Mamma Maria! Familienrezepte aus Sizilien compiled by the youngest of the three sisters, Cettina Vicenzino. Consisting of 80 recipes including traditional Sicilian feasts and peppered with wonderful family photos in the picturesque, rustic Sicilian countryside, the book offers many insider delights to the island’s syncretic culture and traditions.

A Taste of Sicilian Food and Culture in Bonn: An Evening of Music, Readings and Home-made pizza

The family hails from the small town of Militello near Catania and moved to Cologne, Germany in the 1970s where they ran a successful restaurant. Giuseppina, the eldest of the three sisters, who contributed the anecdotes found in the book, recalls the comforting pizzeria scent of warmth, comfort and homeliness which still accompanies her even today. The book is divided into diverse sections such as vegetables, pasta, fish, meat and desserts and also offers the reader an insight into feasts with special food traditions such as the prickly pear celebration or the tomato festivity. 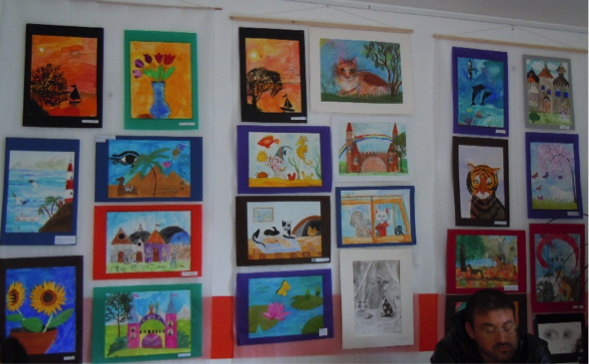 Mamma Maria!, a tribute to the sisters’ love of their mother’s recipes, also features a brief history of the rich and diverse cuisine of Sicily and the many external influences which have shaped its evolution over the centuries. Worthy of mention is the Arabic influence which not only contributed an advanced irrigation system but also brought sugar, rice, citrus fruits, spices, almonds and couscous which are now so common in Sicilian culinary traditions. From the Greeks, the Sicilians inherited the famous ricotta cheese, a favourite in desserts, as well as honey, olives and the culture of wine growing. Last but not least, the Spaniards introduced the two most important veggies to Sicilian cuisine – tomato and aubergine. The latter still bears the name ‘Spanish egg’ because of its small shape and white size in former times. The sisters go to great lengths to underline that the recipes have been passed on from generation to generation and may vary not only from one town to the next but also from one family to the other. In the book, sister Giuseppina recalls the magic and charm her mother’s cooking had on her since she was a young girl and their outings to the fields to collect wild fennel, a staple for the pasta dish ‘pasta ‘cca muddica a finucchiu’. There was a certain taste of ‘Sicilian earth’ in her mother’s cooking as most vegetables went straight from the fields to the pot. Mamma Maria! also includes some ‘exotic’ recipes with pumpkin flowers or desserts with the sweet-smelling jazmin.

At Sunday’s Intercultural event, Rosella’s reading selection included the section on her town’s most important festivities such as the Madonna in Militello held in September, the tomato celebration and the famous prickly pear feast in October. She also highlighted the pervasive all-day picnic culture at the beaches and its evolution over the years. The radios which each family brought to accompany their ‘parties’ have long been replaced by mobile phones and music boxes to accompany the dance courses on offer, to which everyone is invited to join in.

Rosella confessed to me that her favourite recipe was ‘Scaciata’, a double-crust pizza. Accompanying the readings was guitarist Christian Meringolo who describes himself as a ‘Bonner’ with both German and Italian nationalities. The singer and guitarist has made a name for himself in the music industry and since 2014, has been part of the band ‘Dunkelblau’. His company Musica Live also organizes events and parties and offers live music. Much to the audience’s delight, Meringolo covered hit songs such as Adriano Celentano’s ‘Azzurro’, Ricchi e Poveri ‘Che Sara’ and the world-renowned ‘Volare’, originally sung in the 1950s by Domenico Modugno. The mostly elderly public didn’t hesitate to sing along or tap their feet as they enjoyed their ‘Kaffee und Kuchen’ and home-made pizza on offer. 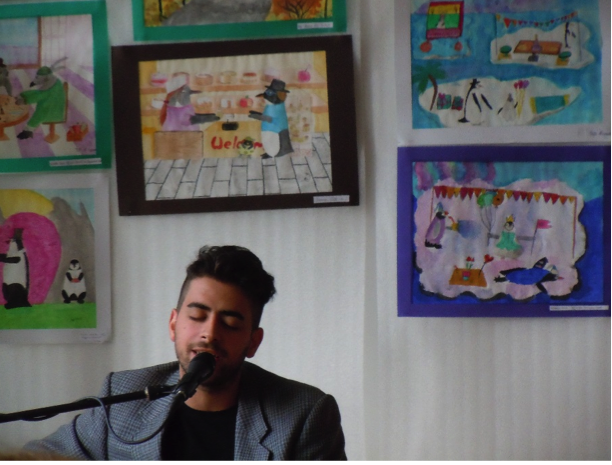 Rosella was quite pleased not only with the turnout but also with Meringolo’s musical accompaniment which she lamented not having last year when she also read from her sister’s book for the Intercultural Week in Bonn. She is very grateful that her family decided to immigrate to Germany and describes this move as enriching and positive. She even talks about ‘positive racism’ shown towards the Italian community at the time and the warm welcome they received. Meringolo was also quick to praise Germany and the many opportunities it has provided for immigrants. One elderly woman from the public commented on the ease with which Italians could settle in Germany, unlike the experience of Turkish migrants, for example, who didn’t share the same Christian tradition with the host country.

The paintings exhibited in the room from the Vera Lust young art students are also worthy of mention. Not only did they add some life and colour to the atmosphere but their motifs – animals, flowers, castles, love, family – called to mind the universal themes which bring peoples of different cultures and backgrounds together. I nonetheless expected more of a Sicilian feel to the event and missed a ‘proper’ display of food traditions (apart from the standard pizza) accompanying the readings and the music!

What do you miss most  about Germany living in France? Some small things…mostly food 😉

One thought on “A Taste of Sicilian Food and Culture in Bonn: An Evening of Music, Readings and Home-made pizza”